SharX is an Ultra Agents Minifigure and villain that was released in Summer 2015.

SharX resembles a shark man, featuring a Sand Blue dorsal shark fin in his back and gills on the sides of his head, as well as flakes in his face and pale purple eyes. His helmet is circular, featuring a jaw in the front, re-using the same mould as Break Jaw, but in Warm Gold. His torso is Medium Stone Grey and depicts armor with a purple lens in the chest, as well as a belt and a respiration tube. His legs are Sand Blue and don't feature any printing, and neither do his arms. His hands are Black.

He holds a black spear gun with a transparent red cone on it as a weapon.

SharX was presumably an enviromentalist that was dealing with sharks of Astor City that got corrupted by AntiMatter's power. 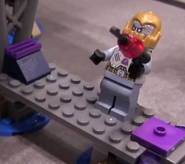 SharX at the Toy Fair
Add a photo to this gallery
view · talk · edit Ultra Agents minifigures
Retrieved from "https://brickipedia.fandom.com/wiki/SharX?oldid=1984000"
Community content is available under CC-BY-SA unless otherwise noted.