Brickipedia
Register
Don't have an account?
Sign In
Advertisement
in: Class 4 articles, Minifigures introduced in 2014, The LEGO Movie Minifigures
English

Sharon Shoehorn is a minifigure in The LEGO Movie. She is the actress who portrays Larry's wife in the TV show "Where are my Pants?".

Sharon Shoehorn is the wife of Larry in the Octan TV show "Where are my Pants?" which is the favorite show of everyone in Bricksburg. It is unknown if Sharon is actually married to Larry, or just acting for the TV series. 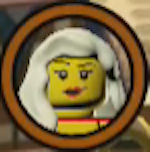