Shazam! has the same black, slicked back hair piece as Bruce Wayne, and similar face printing, the differences being the expression and wrinkles around his eyes similar to Superman and cheekbones closer in design to those being used on 2013 minifigures like Aquaman, but thinner. He also has a double-sided face. One side has a neutral expression, while the other is angry with a wide-opened mouth. His torso has muscular printing with his yellow, lightning-bolt logo, a yellow belt, and a chain on his chest that supposedly attaches to his white cape. His hips and legs are red and his hands are flesh coloured.

His appearance in LEGO Batman 2: DC Super Heroes is unchanged.

In LEGO Batman 2: DC Super Heroes, Shazam can fly, has super strength, is invincible, immune to electricity, and is able to shoot lightning bolts from his chest to destroy golden objects.

When he was fifteen years old, Billy Batson was chosen by a wizard who told him that it was his destiny to become the superhero Shazam!. Every time Billy says "Shazam!", he turns into an adult with the powers of the Greek gods.

Shazam! plays no role in the story but is available on the console version through downloadable content.

In the portable version, Shazam! is an unlockable character. His minikit can be found in the level Assault the VTOL. He costs 100,000 studs.

In LEGO Batman 3: Beyond Gotham, Shazam! along with Miss Martian and Hawkgirl can be unlocked via free play, in the mission "Space suits you, Sir!". He also apears in one of the post-credits scenes. 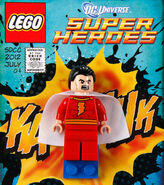 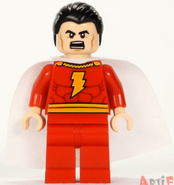 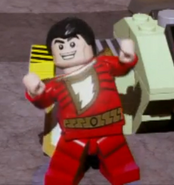 In a polybag set