Jennifer as She-Hulk is green, With dark green hair. She wears a purple and white bodysuit with boots. She-Hulk has six-pack abs and a typical LEGO girl appearance. She also has purple gloves, no sleeves, and green lips.

Jennifer Walters is Bruce Banner's cousin. When she was injured and bleeding, Banner gave her some of his blood as a blood transplant. However, Banner's blood had his gamma-irradiated DNA, giving Jennifer Hulk-like powers. After that incident, Jennifer found herself able to turn into a green, muscular version of herself. Known as She-Hulk and unlike her cousin, she has more control over her powers and can transform in any emotion. Like her cousin, she has super-human strength but unlike him Jennifer loves being She-Hulk more than her alter-ego and often goes about her regular life as her.

Also, similarly to Deadpool, She-Hulk is inexplicably aware that she is a fictional-character and even able to use this to her advantage. In the comics She-Hulk has shown herself able to tear though the pages of comics in-order to advance through time, walk across different panels in-order to get from place-to-place easier, gain information by listening to the narrator of her stories, speed up menial tasks by turning them into montages and she prevents her clothes from ripping as She-Hulk because she has had them approved by the Comics Code Authority (an extreme censorship organization that heavily monitored comics during the 1960s-70s). 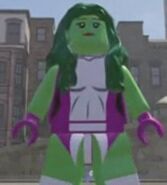