"Unleashed your anger!"
―Palpatine to Luke Skywalker to join the Empire with Darth Vader.

Emperor Sheev Palpatine, also known as Darth Sidious, Senator Palpatine, and Chancellor Palpatine, is a minifigure based on the Star Wars character of the same name. Palpatine was a Dark Lord of the Sith who took over the Republic and then turned it into the Galactic Empire. His minifigure has been released in many different alternations and he has appeared in all four Star Wars video games.

The Palpatine minifigure has been released in six different variations- Four aiming to replicate his Emperor/Darth Sidious person and the other two to showcase him as Supreme Chancellor during the Clone Wars. His original videogame appearance as Chancellor Palpatine during the events of Episode III is vastly different from the physical variant, as it depicts him wearing the dark grey robes he wears during his kidnapping, and has a flesh-toned variant of his original Emperor face.

Palpatine's first variation was seen in the set 7200 Final Duel I which came out in 2002 (along with 3340 Star Wars released in 2000.). The minifigure variation was based on Palpatine's appearance in Star Wars: Episode VI Return of the Jedi. In this variation, Palpatine was designed with a yellow-fleshed face due to the fact that there was no actual coloured skin at the time. It depicted him as a wrinkled old man. His face had black and yellow eyes, red wrinkles under his eyes and around his mouth. His leg piece and arm pieces were completely black. His body piece showed his black Sith robe. Basically a loose robe, with a black cloth tied around on the bottom. His hands were yellow. This variation came with a black cane, a black cape and a black hood. This minifigure variation appeared in three sets; 3340 Star Wars, 7166 Imperial Shuttle and 7200 Final Duel I.

Palpatine soon saw his next release in the set 7264 Imperial Inspection in 2005. In this set, he was presented in a new variation. In this variation, his arm pieces and leg piece remained black, and his body piece remained the same from his first variation, but his face was changed from yellow to grey, and his eyes were made more grey. His hands were also changed to grey. The reason for this change was because in 2005, Star Wars sets started featuring minifigures with flesh-coloured faces to resemble the movies more. Since Palpatine in the movies appeared to be grey, this change was made. This variation was exclusive to the set 7264 Imperial Inspection.

In 2008, the 10188 Death Star was released and included was completely revamped Palpatine minifigure. This minifigure once again was meant to represent Palpatine as Darth Sidious. This minifigure had completely black arm pieces and a leg piece, once again like its predecessor. The image on the body piece was a remade and more detailed black robe. His face was made with bigger yellow eyes and bigger wrinkles. Included with him was a black cape and a black hood and, erroneously, black-coloured hands. This variant is also included in the 8096 Emperor Palpatine's Shuttle.

The Clone Wars variation of Palpatine is based on Palpatine's appearance in the Clone Wars Television series. It represents Palpatine when he was the Supreme Chancellor of the Republic. His face is flesh coloured. It depicts Palpatine as a younger man, with blue eyes and not too many wrinkles. His leg piece and arm pieces are red, and his hands are flesh coloured. His body piece shows him wearing Senatorial robes. He comes with a blonde hair piece, a pair of red cloth shoulder pieces, and the holographic blueprints for the Death Star. He appears in the set 8039 Venator-class Republic Attack Cruiser.

In Star Wars Episode III: Revenge of the Sith, Palpatine wears a dark red senatorial robe with intricate patterns printed on the torso. Palatine has a double sided face, one featuring a scowling expression and blonde eyebrows, and the other side depicting Palpatine with a heavily wrinkled face, with large, yellow eyes and yellow teeth. Palpatine wields a gold-hilted lightsaber and has no cape or hood. He was released in the 2012 summer wave in 9526 Palpatine's Arrest.

In the set 75044 Droid Tri-Fighter Palpatine a dark gray robe with intricate silver printing on his torso, back and legs. His head depicts Palpatine in his older years, with more wrinkles and a few spots on his face. His face is printed on the front an the back, one face depicting Palpatine with a normal expression, and the other side depicts him with a malicious grin. Palpatine uses Bruce Wayne's hairpiece in a white color.

In the set 6211 Imperial Star Destroyer, Palpatine appears in a transparent hologram part. This hologram is basically a long blue transparent brick with his image (as a sticker) imprinted on it as a Emperor.

For the book, LEGO Star Wars: The Dark Side, an exclusive figure of Emperor Palpatine was included. As with the other variations, he came with a hood, cape, and black printing, but he was depicted with light gray paint detailing his robe as well as the silver clasp. His hands and face are flesh-colored, and it presumably represents his appearence on the second Death Star, before his death. Like previous variations of the Emperor, his eyes are bright yellow with black irises. He came with no accessories.

For the set 75093 Death Star Final Duel a slightly altered version of the 2014 minifigure was included. He retains the same torso, leg piece, cape and hood, but comes with an alternate expression exclusive to this set.

Another version of the Emperor would appear in 75185 Tracker I as part of The Freemaker Adventures line.

Palpatine has appeared in all four LEGO Star Wars video games. In the first and third, he appears as Chancellor Palpatine, a video game exclusive Minifigure, and in all three games, he appears as Darth Sidious or the Emperor.

The Chancellor Palpatine figure in-game has all standard minifigure body parts except for the leg piece which is replaced by a triangular LEGO slope piece. His face is flesh-coloured, along with his hands. He wears a blondish-white hair piece. He has a dark grey body piece and dark grey arm pieces, and dark grey legs.

In the second game, LEGO Star Wars: The Original Trilogy, Palpatine appears only as Darth Sidious (Grey Face variation) in the second-to-last level, "Jedi Destiny". He can be bought and played as later on. This time around he had a red lightsaber, could use the Force on dark objects, and could use Force lightning on his opponents.

Darth Sidious was trained in the ways of the Sith by his master, Darth Plagueis, but he murdered Plagueis in his sleep. Darth Sidious then became a politician, using his real name Palpatine instead of Darth Sidious and slowly rose to power, becoming the leader of the Republic as Palpatine, and secretly the leader of the Separatists as Darth Sidious. After a long war between the Republic, lead by the Jedi and fought by clones, and the Separatists, lead by Sith and fought by droids, he slowly gained more control. After the defeat of his two apprentices, Darth Maul and Count Dooku, Palpatine turned Anakin to the dark side and renamed him Darth Vader. After he had complete control over the Republic, all clones and Anakin were ordered to kill all Jedi. After the elimination of most of the Jedi, Darth Sidious announced himself Emperor and named the Republic his new Empire by assuming control of the galaxy as well as the Senate and appointing regional governors such as Tarkin to oversee all star systems. The Emperor and Vader ruled until eventually the only two surviving Jedi, Obi-Wan and Yoda trained Luke Skywalker, Anakin's unknown son, in the ways of the Jedi, so he could defeat the Empire. In Cloud City, Luke is planned to be frozen in carbonite for Palpatine. But first, they tested it on Han Solo. Meanwhile, while Han is being frozen, Luke and Vader battled for the first time, where Luke learns that Vader is his father. When the second Death Star was constructed, the Emperor and Darth Vader captured Luke and brought him on board. Vader and Luke battled in front of the Emperor. Luke won, but told the Emperor he would never serve him. In rage, the Emperor unleashed lightning on Luke, with the intent to kill. As Luke is about to die, Vader realized he must save his son, so he kills the Emperor by throwing him down the reactor shaft of the Death Star. However, the Force lightning was so powerful, that the energy killed Vader as well. The Death Star was destroyed shortly after by the Rebel Alliance. 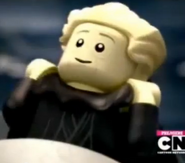 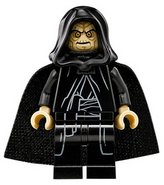