Shelob the Great was a gigantic spider, the "last living child of Ungoliant the Great". She lived in a tunnel high above Minas Morgul. Sauron was aware of her, and used her to guard his border. When Gollum brought Frodo to the tunnel, Shelob attacked and stung Frodo, paralyzing him, and wrapped him in a cocoon. After Sam found him, he managed to wound Shelob after a fight, and she retreated back into the tunnel never to be seen again.

Shelob at the Toy Fair

Shelob wrapping Frodo Baggins in a cocoon in 9470 Shelob Attacks 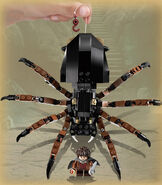 Shelob in comparison to a minifigure 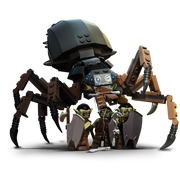 Shelob about to sting Frodo 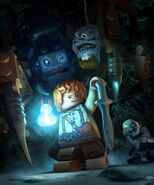 Sam in her lair
Add a photo to this gallery