"You heroes are going down! DOWN!!!"
―Shocker in LEGO Marvel Super Heroes

Herman Schultz has a pair of gloves that can generate destructive vibrations, and wears a padded costume to protect himself. He uses his gloves' power to rob banks, and has also been a member of the Masters of Evil.

Herman Schultz is a former salvage worker who had become a professional criminal and a member of Adrian Toomes' Crew who had sold Chitauri and Ultron based weaponry created by the Tinkerer. Following Toomes murdering Jackson Brice, who had used his modified gauntlet occasionally under the alias of Shocker, Toomes had passed the gauntlet down onto Schultz and appointed him as the new Shocker. With his new title and power of the gauntlet, Shocker still continued to help the Vulture with fighting against Spider-Man's ongoing attempts to bring an end to all of the black market arms deals, which resulted in the Shocker being defeated during a fight and arrested. 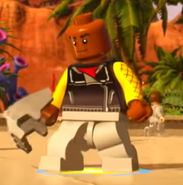