The Shredder is a Teenage Mutant Ninja Turtles minifigure first released in 2013. He is the franchise's main antagonist.

The Shredder's helmet is metallic silver and has three horns on the top that are connected to a ridge that runs above his eye slot. The bottom of his eye slot has a metal veil that hides his mouth. His head has an angry expression with one of his eyes totally white. Half of his head is heavily scarred and disfigured. The Shredder wears silver, metal pauldrons that have three blades on each side the same pieces are used for weapons by Setam in Prince of Persia: The Sands of Time. He also has a dark blue cape that sits on his pauldrons.

The Shredder, also known as Oroku Saki, is the eternal and main adversary of Splinter and the turtles. He is the undisputed leader of the Foot Clan consisting of Foot Soldiers, Dogpound, and Fishface. He is a master of ninjutsu, surpassing the turtles and being equaled only by Splinter. He is also the adoptive father of Karai, who disagrees with her father and rebels against him, even building up an alliance alongside the turtles.

Oroku Saki was born in 1964 in rural Japan as the heir to his father Kaiji's place as leader of the Foot Clan, but was orphaned as a baby when his clan was wiped out by the opposing Hamato Clan. However, when the Hamato Clan's leader, Hamato Yūta, found Saki in the rubble of what was left of the house of Oroku, he took the boy in to be raised alongside his son, Hamato Yoshi, who he trained with in the same ninja school and became as close as brothers with. However, tensions rose when he and Yoshi both fell in love with the same woman, Tang Shen, which sparked a bitter rivalry between them. Eventually, Tang Shen decided to marry Yoshi, causing Saki to learn of his true heritage through his jealousy and rebel by attacking Yoshi in the house of Hamato, intending to kill him. Unfortunately the blow that was intended missed its mark, consequently killing Tang Shen instead. Yoshi struck back, and the battle turned for the worse. During the fight, they destroyed the house of Hamato, and burning pieces of rubble began to rain down on them, leaving them both badly wounded and permanently scarring Saki's face. While walking away, leaving Yoshi in his rage, Saki rescued Yoshi and Shen's infant daughter Miwa and secretly took her to be raised in the Foot as his own, renaming her Oroku Karai, leaving Yoshi to believe she was dead as well. Due to the damage they did to both the property and people of the Hamato Clan, Yoshi became known as Splinter, and Saki as "the Shredder", and were exiled from the clan. Splinter moved to the New York City, and Shredder stayed with the Foot in Japan, eventually rising to become the leader he was destined to be, tutoring numerous disciples such celebrity martial arts star Chris Bradford and Brazilian street thug Xever Montes, and sharing business with several business partners such as Russian arms dealer Ivan Steranko, Italian mob boss Don Vizioso and future Purple Dragon leader Hun.

Fifteen years later, the Shredder learned that Splinter had survived their fight, and is training four teenage mutant red-eared slider turtles and teenage civilian April O'Neil as ninjas of his own. He deployed his army to travel to New York City with intent to kill Splinter. The start of the conflict resulted with Bradford and Montes getting mutated into Dogpound (later Rahzar) and Fishface through the alien chemical that were responsible for the mutations of Splinter and the Turtles, called mutagen, and when Shredder learned through Karai about the Kraang, the outer-dimensional alien race that was responsible for bringing the mutagen to Earth needed a set of psychic powers that O'Neil was born with, he decided to ally with them to get closer to Splinter's demise and so they can provide him with an army of robotic ninjas and mutants while having the mutant army perfected by former TCRI inventor Baxter Stockman, who he mutated into Stockman-Fly. Unfortunately for Shredder, Splinter and the Turtles, Karai ended up becoming a rogue member of the mutant army after discovering her actual heritage through Leonardo's love for her and trying to face Shredder alone.

Shredder later renewed his alliance with the Kraang and helped them invade New York, during which he struck down Leonardo and Leatherhead and faced Splinter, this time achieving victory. He continued to operate in New York during the Kraang occupation and afterwards, and set Stockman to work developing a mind control serum. This would eventually be used on Karai, who was brainwashed into once again believing Shredder was her father; however, she was eventually freed by Splinter and fled New York. Splinter later approached Shredder for his aid against the Triceratons, only for Shredder to sacrifice Earth to finally kill his hated enemy. However, in an alternate timeline created by the Turtles traveling back in time, Leonardo was able to warn Splinter in time, and he stopped Shredder and defeated him.

A CGI of Shredder 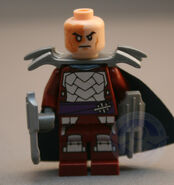 Shredder without his helmet 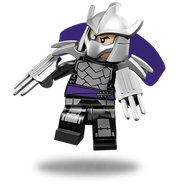 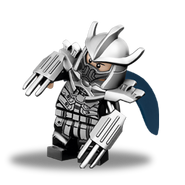