The Shrunken Head is a character in the Harry Potter theme released in 2011. It is a sand green cylinder piece with a printed face design. Before being a piece, the Shrunken Head previously appeared in 4755 Knight Bus as a print on a window. 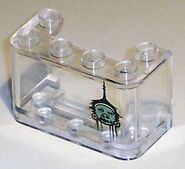 The printed window with the Shrunken Head. 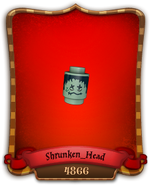 The Shrunken Head in the video game 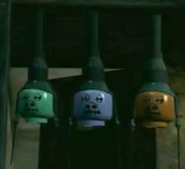 Shrunken Heads outside the Three Broomsticks pub
Add a photo to this gallery
view · talk · edit Harry Potter
Retrieved from "https://brickipedia.fandom.com/wiki/Shrunken_Head?oldid=1939280"
Community content is available under CC-BY-SA unless otherwise noted.