Shuri was the Princess of Wakanda, daughter of T'Chaka and Ramonda, sister of T'Challa, and the leader of the Wakandan Design Group. An innovator responsible for creating much of Wakanda's modern technology, she was also known for designing the current generation Panther Habits. After her brother Black Panther's coronation, Shuri assisted him and the Dora Milaje in tracking down Ulysses Klaue, only to be forced to flee the Golden City as Erik Killmonger overthrew the throne, eventually returning to reclaim Wakanda. Shortly after, Shuri succeeds in eliminating the HYDRA programming from Winter Soldier's mind.

Two years later, she was tasked by her brother and the Avengers in removing the Mind Stone from Vision's head to have Scarlet Witch destroy it, as the android was under threat from Thanos. She was soon compromised by Corvus Glaive, who ambushed her lab and quickly defeated Shuri. Shortly after, she was among the many who died when Thanos completed the Infinity Gauntlet and wiped out half of all life in the universe. She was resurrected by The Hulk in 2023, upon which she participated in the Battle of Earth. 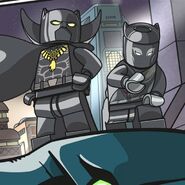