Sid Vacant is a character who only appeared in 5712 LEGO Stunt Rally. He is a gang member who always seems to have a bad attitude. 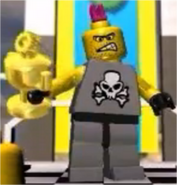 Sid Vacant at the winner's circle.
Add a photo to this gallery

Retrieved from "https://brickipedia.fandom.com/wiki/Sid_Vacant?oldid=1726771"
Community content is available under CC-BY-SA unless otherwise noted.