Brickipedia
Register
Don't have an account?
Sign In
Advertisement
in: Class 3 articles, Video game only minifigures, Minifigures introduced in 2013,
and 2 more

The Silver Surfer has an all silver body, with no hair accessories. He has only two areas of printing his head, which features a mouth, white eyes, and cheekbones and the torso has muscular printing. He rides on a silver surfboard.

The Silver Surfer, originally a young astronomer named Norrin Radd, served as Galactus' herald in order to spare his homeworld, the planet Zenn-La, from being edevoured by the titan. They were stopped from consuming Earth or any other planets by the Fantastic Four, which included Mister Fantastic, the Thing, the Human Torch, and the Invisible Woman.

The Silver Surfer comes to Earth to herald Galactus's arrival, but his surfboard is destroyed and breaks into cosmic bricks. The villains of the Marvel world, such as Magneto, his brotherhood, Sandman, and the Abomination want to collect the bricks to build a powerful weapon for Dr. Doom and Loki. Nick Fury calls upon heroes spanning the universe to stop them. At the end of the game, the super weapon is destroyed, the surfboard is rebuilt and Silver Surfer attempts to lead Galactus as far away from Earth as possible.

A Cosmic Brick of the Silver Surfer's board 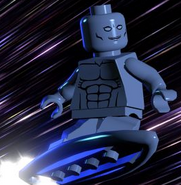 Silver Surfer in the ending of LEGO Marvel Super Heroes

On his board in free roam