Simon Baz is a Super Heroes minifigure that first appeared in 2018 as a playable character in LEGO DC Super-Villains. He was released physically in 2020 in 71026 DC Comics Series.

Simon Baz was a Lebanese-American child living in Dearborn, Michigan, during the events of the September 11 attacks in 2001. Growing up, Simon and his sister Sira were both persecuted due to their ethnicity. As a young adult, Simon got involved in street racing, and eventually car theft; the former put his brother-in-law in a coma in the hospital. Simon is fired from his job and, in a moment of desperation, he steals a car. While trying to evade the police in the stolen vehicle, Simon finds out that there is a bomb in it. Simon drives the van into the abandoned car factory he was laid off from, knowing that no one would be hurt in the explosion. The resulting explosion is seen as an act of terrorism by the authorities, and Simon is brought in for questioning. As Simon is being interrogated, Hal Jordan and Sinestro's rings fused and form a malfunctioning Green Lantern Power Ring that finds Simon, and selects him as the new wielder, flying him away from captivity. Baz later became a Green Lantern for Sector 2814, being partnered with Jessica Cruz. Baz originally had an attachment to his pistol and refused to give it up due to his paranoia, hard childhood, and inexperience with a power ring, but Batman convinced him to give it up and focus on being a Green Lantern. 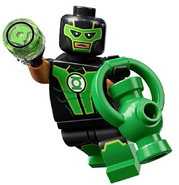