"So, the final battle will be here, over your puny world, Green Lantern?"
―Sinestro in LEGO Batman 3: Beyond Gotham

Sinestro has a black hair-piece that is slicked-back and has pointed, purple ears attached, similar to the Werewolf's from the Minifigures theme . His head and hands are also purple, representing his skin colour in some comics. He has sunken, yellow eyes, slanting eyebrows, and a moustache with a frown underneath. He has a muscular yellow torso decorated with the patterns of his Yellow Lantern appearance, including the fear symbol on his chest. He has black arms and legs, but the bottom of his legs are decorated with the pattern of his yellow boots. He carries a yellow ring, similar to the one used in The Lord of the Rings which glows and leaves a yellow streak behind him.

Thaal Sinestro was once considered to be the greatest Green Lantern of them all, famous for establishing total peace within his space sector, 1417. He was specifically assigned by the Guardians of the Universe to mentor the new human recruit, Hal Jordan, and the two became friends. Over time however, as Sinestro became more and more stressed with his work, he started employing more questionable methods to ensure that peace was kept within his sector. Hal discovered this upon a diplomatic mission to Korugar, Sinestro's home planet, with him and saw that the Korugarans were 'kept in check' by living in fear of him and being forced to worship him. Sinestro was accused of these crimes, and Hal had no choice but to testify against him, so Sinestro was banished and swore revenge on the Green Lantern Corps. With the help of the Weaponers of Qward, he forged a Yellow Power Ring for himself, giving him the absolute power of fear. Eventually, he would form his own Sinestro Corps and become the arch-nemesis of the Green Lantern.

In the console version, Sinestro is a boss at the Metro Station (Central), and an achievement/trophy can be obtained if the player uses Green Lantern to defeat him. After his defeat, he can be purchased for 125,000 studs.

In the portable version, Sinestro is unlocked for Free Play by completing the Arkham Nightmare Justice League mission.

Sinestro, along with Arkillo and Sinestro Corps Warrior can be unlocked via free play, in the mission "Aw-Qward Situation"

Sinestro in LEGO Batman 3: Beyond Gotham 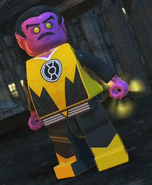 Sinestro with his weapon 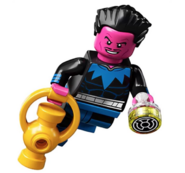