Brickipedia
Register
Don't have an account?
Sign In
Advertisement
in: Class 2 articles, Minifigures introduced in 2014, Legends of Chima minifigures
English

Long before Mount Cavora rose from the ground, Fangar (as he was formerly known) lived among the primitive hunter tribes in ancient Chima. The Phoenix tribe, hoping to enlighten their primal brethren, invited the hunters to join them on the peak of Cavora and use their educational resources. In this new environment, Fangar excelled above his peers, learning nearly all there was to learn in the phoenixes' institutions.

Unfortunately, Fangar also became ambitious, believing that he could use his knowledge and skill to conquer Chima. Now calling himself "Sir Fangar", he gathered an army and razed everything in his path; none of the other primal animals could stop him. The phoenixes took action, saving as many animals as possible, then performing "The Great Illumination" - a ritual requiring 8 pieces of armor that both raised Mt. Cavora and sunk The Gorge of Eternal Depth (and the hunters along with it). The ritual drained the gorge (and the surrounding area) of heat, freezing the hunters in ice.

Sir Fangar was freed when Scorm unknowingly tossed a CHI orb into his icy prison, reanimating him and enabling him to break free from the ice. As he gathered his bearings, Scorm and his fellow Crawlers tossed more CHI down the gorge, allowing Sir Fangar to reanimate more of his allies. Realizing that they had been given another chance to conquer the world, Sir Fangar led his army out of the gorge. Along the way, they also discovered that they had absorbed some of the Great Illumination's power during their imprisonment, allowing them to freeze their surroundings and imbue their weapons with ice-based CHI.

After the Ice Clan froze the Scorpion, Spider and Bat clans who tried to stop their advance, Sir Fangar opened a hidden seal in the cave, revealing some of their old vehicles. Thus armed, the Ice Clan emerged from the Gorge of Eternal Depth and invaded Chima itself, starting with the Crocodile tribe's swamp.

With a foothold in Chima secured, Sir Fangar had his Ice Hunters construct a fortress atop a massive mountain of ice, using it to spread their influence across Chima. However, his old enemies among the Fire Tribes soon intervened at Eris's request, giving the tribes of Chima Fire CHI to assist them against the Ice Hunters.

In "Cool and Collected", Sir Fangar watches as his Hunters prepare to capture Flinx, but unfortunately for him, they all fail horribly.

In "The Snowball Effect" Sir Fangar leads a surprise attack against the Lions. He manages to freeze and capture every troop, including Lagravis before Tormak's arrival. Fangar mocks Tormak about how his tunnel cat pals died, but Tormak single handily defeated all of the troops and thawed all of the Lions, however Sir Fangar snuck away while he was fighting and took Lagravis with him.

In "The King Thing", Sir Fangar launches a massive assault on Lion City, attempting to secure Flinx for his collection. They freeze over the city and defeat the troops, and the vultures even contain the Lion Legend Beast. Although the Ice Hunters fail to capture the phoenix child, they deface the Lion Tribe's gate (making it look more like a saber-tooth tiger) and capture Li'ella.

In "A Very Slippery Slope", Sir Fangar reveals his plans to marry Li'ella, believing her to be worthy of becoming his queen. As he sends Li'ella away to be prepared for the wedding, his fortress suddenly comes under attack by Worriz and Gorzan. His trophy room is raided by the other heroes and the "trophies" are all released. Upon discovering this, Sir Fangar breaks out in a fit of despair, sobbing for his lost collection. All the while, Flinx, his object of desire and intended "crown jewel" is waiting in the room to interrogate him. Given the opportunity, Sir Fangar attempts to freeze the Phoenix child, but the latter generates a field of heat to protect himself. Sir Fangar ends up slipping out of the melting fortress while Flinx is being contained by Tormak and Laval.

In "The Artifact," Sir Fangar (evidently having gotten over the loss of his collection) directs his attention to the largest flaw in his plan to conquer Chima; the possibility of the Phoenix launching another illumination. He reveals that his love for Li'ella was more than just shallow emotion, but a ploy to invoke Tormak's rage. He then taunts Tormak, offering Li'ella as a trade for The Artifact; the only known map to the Fire Wing Harnesses. Tormak, unable to bear the thought of never seeing his daughter again, follows through with the deal. In the end, Sir Fangar's plan works; having The Artifact destroyed and Tormak cursed by it's power.

In "Wings of Fire", the invasion of the lion city is moving faster than ever, thanks to the mammoth stompers. He attacks the lion city with the mountain and easily breaks the walls, but the lions hold off his troops long enough for the Phoenix and other tribes to arrive and even the fight out. He orders Vardy, who is hesitant, to release the 4th hunter tribe, the ice bears.

In "The Heart of Cavora," Sir Fangar is completely losing, but then his backup arrives, and they destroy everything and defeat all of the tribes, even the tiger tanks. Their mechs then push the ice mountain into the lion city. Fangar's troops steal all of their CHI, but they are under attack from the undefeated Phoenix airship. He pours the CHI into the heart of the mountain and shoots up a giant ice spike, destroying the airship. Although the ice bears are defeated, Fangar leads the other 3 tribes into the Phoenix temple, where they freeze everything and defeat all of the guards. He lectures Fluminox about his "teaching", and informs Flinx about how his father, the 9th Phoenix, failed his tribe and chickened out of the Great Illumination. When Fluminox says it was because of an infant Flinx, Fangar attacks him, only for Fluminox to step in. They duel, and Fluminox has the upper hand until every ice tribe member gangs up on Fluminox, defeating him. As he is about to push him into the heart of Cavora and kill him, the 8 main heroes come with their fire wings, and they collide. Flinx jumps in and triggers the Illumination, destroying all of the ice. Sir Fangar and the rest of the Ice Hunters are healed of their near-rotted appearances and corruption.

In The TV Show 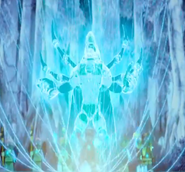 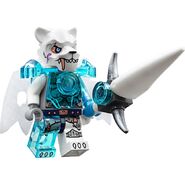 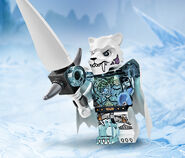 Sir Fangar leads the Hunters against the rest of Chima

Sir Fangar in front of the Ice Hunters 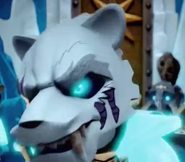 Fixed by the illumination 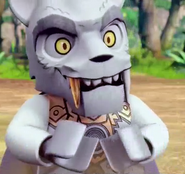 Sir Fangar cured after the illumination 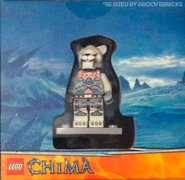 Français Polski
Community content is available under CC-BY-SA unless otherwise noted.
... more about "Sir Fangar"
RDF feed
Accessories
Glacior
Fangzicle
Koldhak +
Appearances
70143 Sir Fangar's Saber-Tooth Walker
70156 Fire vs. Ice
70147 Sir Fangar's Ice Fortress
70224 Tiger's Mobile Command
5004077 Minifigure Pack +
ArticleRating
2 +
Image
70143_alt5.png +
Img1
SirFangarr.jpg +
Img2
Screen_Shot_2014-06-13_at_9.44.34_AM.png +
Img3
loc161.png +
InfoboxTemplate
Minifigure +
ShopDescription
Sir Fangar is the leader of the Ice Hunter … Sir Fangar is the leader of the Ice Hunters who are menacing the land of Chima. Smart, unpredictable and dangerous, he intends to conquer Chima and then remake it into what he wants it to be. Sir Fangar is very aggressive and keeps his army on the move, but his unwillingness to retreat has cost him in battle. Along with taking over Chima, Sir Fangar hopes to “collect” and freeze one of every tribe, including the Phoenix, as trophies.tribe, including the Phoenix, as trophies. +
Theme
Legends of Chima +
Title
Sir Fangar +
Txt1
With Cape +
Txt2
Without Cape or armour +
Txt3
Cured +
Years
2014-2015 +
Advertisement