Sirius Black is a Minifigure from the Harry Potter theme. His minifigure appears in 4756 Shrieking Shack and 4753 Sirius Black's Escape and 75945 Expecto Patronum. Sirius also appears in Animagus form in 4755 Knight Bus, as a face in the fireplace in 5378 Hogwarts Castle and 4842 Hogwarts Castle, and on a wanted poster in 10217 Diagon Alley and 75955 Hogwarts Express. A completely redesigned version of Sirius appears in LEGO Harry Potter: Years 5-7.

Sirius Black belonged to a family who believed in pure blood supremacy, although he greatly disagreed with their beliefs. His childhood was unhappy, which led him to resent most of his family. When he attended Hogwarts he was sorted into Gryffindor, defying his family's tradition of Slytherin. He befriended James Potter, Remus Lupin, and Peter Pettigrew. He and James were known as the troublemakers at Hogwarts. When he discovered that Lupin was a werewolf, he along with his friends, spent years trying to become Animagi, so they could comfort Lupin during his transformations. During his fifth year he succeeded, becoming an animagus whose form was a large black dog. So they could talk about there adventures without people knowing, he was given the nickname Padfoot. After they left Hogwarts, he joined the Order of the Phoenix during the First Wizarding War. During this time James named Sirius the Godfather of Harry Potter, James's son. After the death of James and Lily Potter, he realized that they had been betrayed by Peter Pettigrew. He went searching for Peter to bring him to justice. But Peter killed off twelve muggles, cut off his finger to give the impression he was dead, and transformed into his animagus form of a rat, and escaped, leaving Sirius to take the blame. He was framed of murdering twelve muggles and Peter Pettigrew by Barty Crouch Senior and spent twelve years in Azkaban, the wizard prison. Sirius was able to survive those twelve years by reminding himself that he was innocent, and although it wasn't a happy thought, it kept him sane. While in prison, he gained possession of a newspaper, in which he discovered that Peter had been hiding as a rat with the Weasley family. Determined to bring Peter to justice, he escaped by transforming into a dog and slipping through the bars of his cell. Sirius tracked down Peter to Hogwarts. Sirius, along with Remus Lupin, tracked Pettigrew to the Shrieking Shack. After capturing him, the truth was revealed, and Harry and Co. became friends with Sirius. Unfortunately, before they could bring Peter to justice, Lupin transformed into a werewolf under the light of the full moon, creating enough of a distraction for Peter to transform into a rat and escape. Without proof of his innocence, Sirius was taken into custody and was sentenced to the "Dementor's Kiss". With the use of a Time Turner, Harry and Hermione Granger were able to free Sirius, who escaped on Buckbeak the Hippogriff.

Sirius, being the last heir of the Black family, took ownership of his old house at 12 Grimamauld Place, despite despising the place. At the start of the Second Wizarding War, 12 Grimmauld Place was used as the Headquarters of the Order of the Phoenix. Still on the run, Sirius was forced to stay in the house at all times. Being an energetic man, he hated being cooped up. His old House Elf, Kreacher, greatly disliked him, preferring his cousins, the Malfoy's. Kreacher betrayed Sirius by tricking Harry into believing that Sirius had been captured by Lord Voldemort, and was being held in the Department of Mysteries. After hearing that Harry had run off to the Ministry to save him, Sirius left his house with other members of the Order to save Harry. He was killed in the Battle of the Department of Mysteries by his cousin, Bellatrix Lestrange, when she used a curse and Sirius fell into the veil in the Death Chamber, which was a passage to the afterlife. 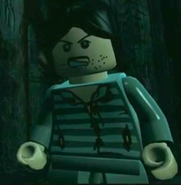 Sirius in the video game

Sirius as his Animagus form, a dog

Sirius during the Battle at the Department of Mysteries

Sirius being killed by his cousin, Bellatrix Lestrange

Sirius brought back by the Resurrection Stone 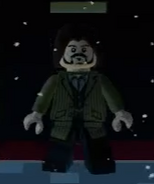