The Sith Trooper is a Star Wars minifigure that was first released in 2019.

With the death of Supreme Leader Snoke, the shadow and secrecy surrounding the truth behind his hermit state had begun to vanish. As the First Order marched upon the Resistance to ascertain galactic supremacy, an armada of planet-destroying Sith Star Destroyers and zealous elite soldiers awaited on the enclave world of Exegol. Trained with modules similar to the ones used by the Kaminoans for their Clone Troopers, equipped with superior specialized equipment, encased in shining crimson-red armor and even more blindly obedient than all their forebearers, the Sith Troopers were the shock troops of the reborn Emperor Palpatine. They were the children of the fanatical Sith Eternal, a mystical cult on Exegol that desired the renaissance of the golden age of ancient Sith Empires. With them at his command, the Emperor sought to support the claim to power of his new ally, Supreme Leader Kylo Ren, or if not his own through the ascension of the Final Order - a new Sith Empire born from the union of the Sith Eternal and the First Order.

In the Battle of Exegol, Emperor Palpatine ordered General Pryde to prepare the unleashing of the combined might readied for the Final Order against the Resistance. However, the Jedi Rey was able to use all her strength to defeat the malign Sith Lord once and for all, while the Resistance and the citizens' fleet cripples the vanquished Emperor's forces. 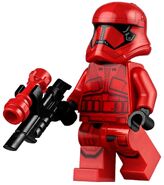 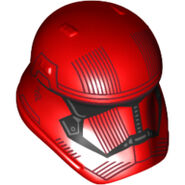