"I hope so! But only if it is to teach the surface dwellers a lesson for keeping us locked underground for so many years!"
―Skalidor to Fangtom talking about the release of The Great Devourer.

Skalidor is a minifigure released in 2012 from the Ninjago theme. He is the general of the Constrictai tribe. He also appears in a commercial for the Ninjago website for the 2012 minifigures.

He seems to be a bit dim-witted in Ninjago: Masters of Spinjitzu. When Cole and Zane climb the "Mountain of a Million Steps" and enter the cave of the Constrictai, he attacks them. Zane calls him a coward for staying behind the others just to tell them that Pythor had been there before them. He also suggested releasing The Great Devourer in "Darkness Shall Rise".

Cole then tries to play Sensei Wu's ancient flute but Skalidor grabs him with his tail and chokes him. Cole, beginning to feel faint, drops the flute so Zane (who is wearing pink, due to a practical joke) does Spinjitzu and grabs it but before he gets half a note out, Skalidor grabs him with his hand and chokes him. Zane persists and is able to blow out just enough of the tune to make Skalidor react. Cole then hits him in the torso with his Scythe of Quakes and knocks him out, making their escape and rushing to warn Kai and Jay that they are walking into a trap.

The next episode he appears in is called The Snake King, when Pythor challenges the snake generals for their allegiance. Skalidor quotes, "There's no way he can defeat the four of us at once!" He then tries to hit Pythor with his staff, but Pythor manages to swipe Skalidor off his tail using his tail. Soon, Acidicus, Fangtom, and Skalidor pounced on Pythor. Skales handed Pythor the sacred flute and caused a painful ringing in the Snakes ears. He then punched the stunned snakes, punching Skalidor last, and took their staffs. Pythor returned them when Skalidor and the others agreed to let Pythor be the Snake ruler.

In season 3, the serpentine decided to follow Lord Garmadon instead of the generals. Fangtom, Acidicus, and himself worked for Skales in the attempts to win them back. 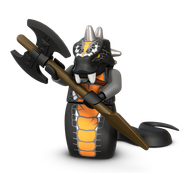 Skalidor covering his ears from the Sacred Flute

Close Up
Add a photo to this gallery