The Skater is a minifigure from 8683 Minifigures Series 1. He comes with a skateboard, and a black version of the hairpiece originally only found on Max, the LEGO Club mascot. His shirt is sand green with a skull on it. He has blue pants.

The Skater has dark blue legs and hips, a yellow flesh tone, and a sage green torso and arms. The printing on his torso shows that he is wearing a hoodie, and is has a double-sided pocket on the front of it. There is a skull and cross bones in the middle of his torso, with two hoodie strings just above it, and clothing wrinkles to either side of it. At the top of his torso, you can just see the collar of his white shirt underneath his hoodie. His facial expression is a relaxed smile with a slightly raised eyebrow. His hair is black. 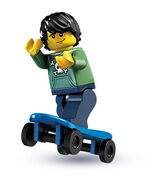 Deutsch Français
Community content is available under CC-BY-SA unless otherwise noted.
... more about "Skater"
RDF feed
Accessories
Skateboard (Blue) +
Appearances
8683 Minifigures Series 1
853195 Brick Calendar +
ArticleRating
2 +
Image
SS11.jpg +
InfoboxTemplate
Minifigure +
ShopDescription
“Bet you can’t do THIS!” The young … “Bet you can’t do THIS!”</br></br>The young Skater practices all the time to be the greatest skateboarder in the world. He lives for speed and tricky stunts, and when he’s around, any and every surface becomes his own private skate park. His board is his prize possession, and he always makes sure to keep it clean and shiny, even when he gets totally grungy himself.</br></br>The Skater is extremely competitive, and he can’t stand to see anyone do something better or faster than he does. His rivalry isn’t just limited to other skateboarders – he’ll try to out-race trains and out-jump pigeons flying in the park, just to prove he can. He hasn’t beaten them yet, but he’s sure he will some day! them yet, but he’s sure he will some day! +
Theme
Minifigures
Series 1 +
Title
Skater +
Years
2010 +
Advertisement