In the Harry Potter theme, the black skeletal horses were given wings to represent Thestrals, magical creatures that can only be seen by people that have seen other humans die. They appeared as only in 5378 Hogwarts Castle. 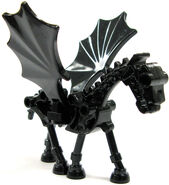 Add a photo to this gallery
view · talk · edit Animals
Retrieved from "https://brickipedia.fandom.com/wiki/Skeletal_horse?oldid=757750"
Community content is available under CC-BY-SA unless otherwise noted.