Skeleton Drones were the minions of Ogel in the Alpha Team theme.

Skeleton Drones are normal townspeople enslaved by Ogel with his Evil Orbs. True to their name, they have a skeletal appearance and are dressed in red and black.

In the original video game LEGO Alpha Team released in 2000, on which the theme was based,[1] they are referred to exclusively as "Zombies". Several variations exist:

While the zombies in the video game have a custom head print, some in-game images (such as large posters Ogel has in his bases) show them with normal skeleton heads.

In LEGO Logic, the original version of the game that would later become LEGO Alpha Team, Ogel's minions were minifigures with the body of Ann Droid and skeleton heads. It seems the most prominent variation of them also wore black cowboy hats and bandanas.[1]

When LEGO launched sets based on LEGO Alpha Team in 2001,[1] zombies were renamed to skeleton drones and were given standard skeleton heads. Two were included in 6776 Ogel Control Center, most closely resembling the Guards from the video game, with epaulets and black spears.

In Mission Deep Sea, skeleton drones were included in many sets. They wear the same suits as the guards from the Ogel Control Center, but they received a new head print, breathing tanks, black flippers, large transparent green helmets, and transparent green spears. Another slight variation had a badge on the chest, apparently indicating a higher ranking drone.

In 2004 - 2005, skeleton drones became known as ice drones. They wore the same helmets and had the same heads as their Mission Deep Sea counterparts, but had a new outfit design with a darker red color and new Ogel emblem on their torsos, and wielded transparent blue chainsaws.

The Super Ice Drone only appears in 4774 Scorpion Orb Launcher. Nothing is known about it, aside from its name from the set description (though some descriptions of the set claimed it included Ogel instead). It wears a similar suit to the normal ice drones but has a new black head with white printing and red detailing in the eyes. 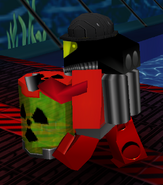 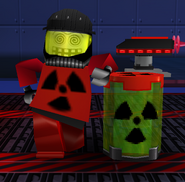 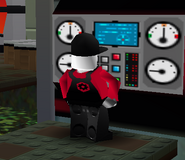 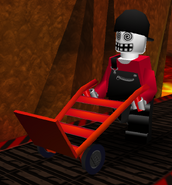 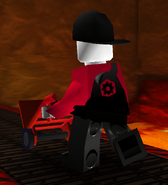