Skeletron is a minifigure in The LEGO Movie. His name is a portmanteau of "skeleton" and "tron" as he is a robotic skeleton, they were most likely based on the Terminator from the film franchise of the same name. The Skeletrons are voiced by screen editor David Burrows alongside the other robots that work for Lord Business.

In The LEGO Movie, Skeletrons are minions of Lord Business that are usually seen guarding anywhere where he is and acting as personal bodyguards. They are simply robot exoskeletons without clothing, bullet proof vests, or helmets. 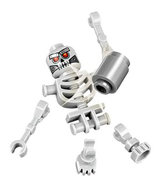 Skeletron with Frank the Foreman

In The LEGO Movie 2 with Bad Cop 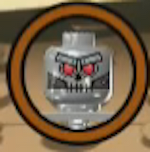