The Skull Sorcerer is a minifigure from Ninjago: Masters of Spinjitzu released in 2020 and the main antagonist of the 13th season of LEGO Ninjago.

The foil bag version of the Skull Sorcerer lacks the wings of the version that appeared in sets.

The Skull Sorcerer was in fact King Vangelis of Shintaro, ruler of the Sky Folk and their Ivory City, and father to Princess Vania. Having built his city’s fortunes with the export of Vengstone mined from the mountain, he sought to secure his power and their future. To that end, he sent out a summons that attracted Fungus the wizard, Plundar the thief, and Korgran the barbarian. Vangelis tasked this trio with recovering a powerful, dangerous artifact: the skull of the dark sorcerer Hazza D'ur.

When the adventurers returned with the Skull, Vangelis revealed that he did not wish to destroy it but wield it. Having gained firsthand knowledge of its evil, the trio objected, prompting Vangelis to open a trapdoor beneath them that dropped them into the depths of the mountain. With the power of the Skull, Vangelis reanimated skeletal Awaken Warriors to serve as his minions in his new guise. He also reanimated the skeleton of the dragon Grief-Bringer, which he used to enslave the Munce and Geckle peoples it had terrorized in life.

Vangelis lived this double life of seemingly benevolent ruler and cruel tyrant for some years. Then, in preparation for Vania’s birthday, he invited the heroic Ninja to visit Shintaro. In so doing, he unwittingly invited Cole, son of the late Elemental Master Lilly who had vanquished the Grief-Bringer in the first place. When Gleck the Geckle visited Cole’s room at night, Cole’s suspicions were aroused.

Guided by Vania, who had encountered Gleck in her youth but mistakenly believed him to be imaginary, Cole and his friends traveled into the supposedly empty dungeons and discovered the tyrannical empire Vangelis had built. However, when Cole, Vania, and Wu reported the matter to Vangelis, he revealed himself as the mastermind. Opening his trapdoor yet again, he sought to rid himself of Wu and Cole. Vania refused to forsake her new friends, however, despite Vangelis' warning that she would cease to mean anything to him if she remained with them.

In order to protect his own position, Vangelis blamed Vania’s dragon Chompy for the “accident” and had it caged. Unbeknownst to him, his latest victims had survived their fall and met Fungus and his comrades, now also including the giant spider Adam. After hearing about Vangelis’ betrayal of these adventurers, Cole invited them to join him and his friends in seeking to escape the depths and bring Vangelis to justice. 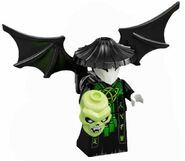 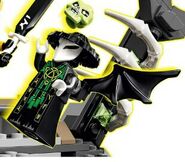 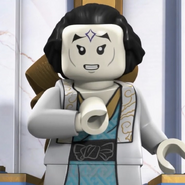