A Skull Twin is one of two alien criminals from the 2009 Space Police III line (together they are known as the Skull Twins). They appear to be white skinned aliens wearing skull masks of some kind. Each twin's head had a two-sided face. One side has two eyes and the other side has three eyes, one on his forehead. The Skull Twins drive a Skull Interceptor. They also have the word "OCTAN" printed on their uniforms. It was also hinted by LEGO on the Space Police webpage's "Bios" section that there might be more than two Skull Twins in the Space Police III storyline, but this was not confirmed. They are members of the Black Hole Gang. 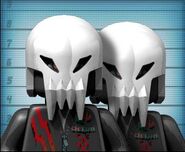