Skylor is a Ninjago minifigure that was released in 2015. In Ninjago: Masters of Spinjitzu she is the Elemental Master of Amber and can absorb elemental powers on touch and use them herself. She is the daughter of Master Chen and Kai's love interest.

Skylor's original variant featured a Flame Yellowish Orange colored outfit with some tan details and black hands. She has Oriental symbols on her mask and is armed with a crossbow and quiver.

In season fifteen, Skylor initially wore her "Hunted" suit with an updated design featuring leg and arm printing that the physical minifigure lacked.

She appears in the fourth season of Ninjago: Masters of Spinjitzu as a contender in Master Chen's Tournament of Elements.

In "The Invitation", she is first seen at the docks where all of the other contenders are gathered. Right at the moment of boarding, she catches the eye of Kai, despite her initial "cold" behavior. It is only after he stands against Karloff for her honor that she apologizes to him while helping him up. As she does so, strange fire-like energy passes between their hands, and she looks away in embarrassment.

It is only in "Only One Can Remain" that she and Kai introduce themselves, as they find themselves to be neighbors. She hides her elemental power, however, saying "wouldn't you like to know?" which makes Kai briefly lose control of the fireball in his hand. Their moment is interrupted by Chen's announcement that the first round to find a Jade Blade has begun. Seeing one on the roof above, Kai unknowingly helps her up from falling which allows her to glide up to the roof. She is among the others who made it with a blade to the next round. That night, she attempts to warm up to Kai by telling him her elemental power, but is unable to when Kai unexpectedly takes his leave. In reality, he was trying to meet with the other ninja and help Jay from falling from his balcony. Afterwards, she practices her exercises and her elemental power... Cole finds a secret tunnel under Kai's bed and the Ninja use it to try to find Zane. Jay quickly finds secret spy holes in the wall he tells everyone that it's Skylor's room and then Kai and Jay sit and watch for a bit she then uses her elemental power which appears to be fire, like Kai--a surprise that is noticed by the ninja who see her through a hidden passage in her wall. Cole later states that all masters of the same element are descendants implying that Kai and Skylor are related.

In "Versus", she is seen with the other ninja as Kai fights the Master of Smoke Ash. She instantly becomes worried when Kai is in danger, as well as cheers for him when he wins, implying she is growing fond of him.

In "Ninja Roll", she is pitted against Jacob the Master of Sound in a room full of vases. While watching her movements, Sensei Garmadon deduces for the ninja that her elemental power is Amber--energy assimilation--which explains how she is able to use Kai's fire and, presently, Jacob's soundwaves. As for the round, she emerges as the victor, finding the Jade Blade within one of the vases, to Kai's elation. During the "Thunderblade" round, she is among those who team up against the Ninja; but she helps Kai up after falling from his roller skates in the beginning. Kai later tries to get her to side with them but ends up offending her, to the point that she thinks he's trying to get her out of the tournament. It is after he shares his knowledge of Chen's true intentions that she sides with him and his friends, and even helps them win the round. Despite the other turnovers' insistence, only when she intervenes on Lloyd's team's behalf that Chen relents into declaring him the winner.

In "Spy for a Spy", she is seated with the other remaining elemental masters, and accidentally picked up Cole's fortune cookie (telling how he and Zane will be escaping), she gave Kai the cookie telling him that he was lucky that it fell into her hands instead of someone untrustworthy. Chen tells the ninjas that he knows of the alliance, making the ninja want to check for a spy. They decide to check their backs for the mark of the anacondrai, most of the elemental masters allowed them to check she however felt told Kai that she was offended that he would think she could do such a thing. They let her leave after Shade escapes while she was walking out she showed that she didn't have a mark, yet. She then goes to her father revealing that she is the Spy.

Skylor later appears in "Curseworld, Part I" running Mister Chen's Noodle Shop with Ronin as her only customer on a holiday; she gives him his meal free of charge, and later learns that he used to live in Stiix.

In "Secrets Discovered", Nya comes to the conclusion that Skylor is the new Samurai X due to the warrior's fighting ability and power to imitate the voices of various people. However, she is proven wrong when, upon going to meet Kai at the Noodle Shop, she finds Skylor there and learns that Skylor has been with Kai the whole time she was confronting the new Samurai X. Skylor also offers the pair some counsel due to Kai's apparent discoveries that their father and mother are not only alive, but working for their new enemies Acronix and Krux. She also begins to offer her help to the ninja but is cut off as they are leaving, and returns to her dinner of noodles.

Skylor first appears in the episode "Firstbourne", in the middle of rescuing Lloyd, Nya, P.I.X.A.L., and the rest of the Resistance, along with other elemental masters. Once they return to their garbage depot, she reveals that she had lost her powers, but that she had gotten them back, and that she believes that Lloyd will also regain his powers. She introduces the resistance to the other elemental masters there, even though most of the Resistance already knew them. She goes on be possibly the second most important part of the team that infiltrated Borg Tower, which Garmadon was using as a headquarters. This happens when Lloyd suggests to her that she tries combining the powers of light and shadow, effectively turning their group invisible. She is one of two members of the group who return to Borg Tower later, the other being Lloyd.

In the episode Saving Faith, she absorbs Emperor Garmadon's elemental power in order to try and control the Colossi, also known as the Oni Titan. She is somewhat successful, dealing a huge blow to Garmadon, before being poisoned by his power. On her second visit, she is on a mission to absorb Garmadon's power along with Mystake, who appears as Harumi for this mission. They are successful at the cost of Mistake's life, and later that episode, Skylor successfully takes control of the Colossi. Although this is a major blow against Garmadon, it poisons her, making her incapacitated for the rest of the season until Lloyd defeats Garmadon with Master Wu's help. She wakes up in Kai's arms: a happy reunion for the two.

Skylor is among those present at the Monastery of Spinjitzu at the ceremony commemorating the defeat of the Oni. She comes up behind Kai after the Ninja have added their handprints to the mural, giving him a smile and a wink.

In “The Turn of the Tide”, Skylor is among the Ninjago Island residents who appear at the ceremony honoring Nya.

In "A Mayor Problem", Skylor arrives at the monastery in response to a call from Lloyd, with Kai being surprised that Lloyd has Skylor's number. Since Zane is needed for a mission to Kryptarium Prison, Skylor copies his powers in order to keep Nya-still in water elemental form-frozen while they are gone. Unfortunately, she starts to run out of power with the Ninja still not arrived back yet, though Zane returns just in time in "Public Enemies 1, 2, 3, 4, and 5!" After copying his powers again, Skylor resumes the task while the Ninja are busy recovering Aspheera's staff.

In "A Painful Promise", Skylor and Pixal continue their efforts to keep the frozen Nya stable while they await the return of the Ninja. She is later forced to take cover when Aspheera turns on the group and begins attacking, before looking on as Aspheera drains Nya's powers while the Ninja battle the New Ninja. Due to being present for neither Aspheera's breakout nor the theft of her staff, she isn't taken into custody, and is left in charge of the once again human Nya along with Pixal and Wu. In "Ninjago City vs. Ninja", Skylor attends the trial of the Ninja, and is present when they are sentenced to five years in Kryptarium Prison.

In "Kryptarium Prison Blues", Skylor and Dareth visit the Ninja in prison, and Skylor informs them that Vangelis has escaped from his imprisonment in Shintaro. She also updates them on Nya, who is struggling with being forbidden to visit her friends in prison, feeling responsible for their confinement, and being without her elemental powers.

Skylor beginning her shape shifting from Condrai Cultist into herself.

Skylor with her Father (Chen).

Skylor without her hood.

Skylor transformed into an Anacondrai 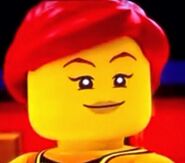 First look at Skylor as an Anacondrai. 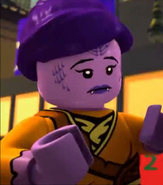 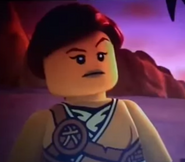 Skylor no longer an Anacondrai.

Skylor and Kai about to kiss

Being cut off by Dareth