Brickipedia
Register
Don't have an account?
Sign In
Advertisement
in: Class 2 articles, Minifigures (theme), Minifigures introduced in 2012,
and 2 more
English

The Sleepyhead is a Collectable Minifigure released in 2012 as one of the sixteen minifigures from 8827 Minifigures Series 6.

The Sleepyhead is dressed in light blue pajamas. He has reddish brown spiky hair and a double-sided head, with one side showing a yawning expression with shadows under his eyes, showing he is tired. The other expression has closed eyes and a closed smile that shows that he is sleeping. His accessory is a light brown teddy bear.

The Sleepyhead loves to sleep and head off to a fantasy land by the name of "Dreamland." In "Dreamland" the Sleepyhead goes on many adventures such as seeing colourful knights with swords that shoot lightning or using a time machine that is powered by historical hats. Also the Sleepyhead has a teddybear that makes him comfortable and also has a very comfortable bed.

Emmet, the main character in The LEGO Movie uses the same pajamas when he wakes up and hairpiece for the shower scene. In addition, Sleepyhead also appeared in the movie as a Master Builder that is seen in Cloud Cuckoo Land, but his face is the same as Emmet and the hair is differently colored.

Lloyd Garmadon, the main character in The LEGO Ninjago Movie is seen with the same pajamas when Garmadon accidentally butt dials the latter. Additionally, Sleepyhead can be seen amongst the civillians evacuating from Ninjago City on a boat. 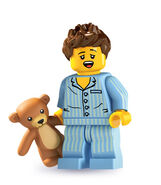 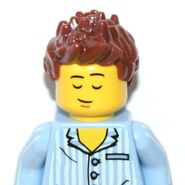 The Sleepyhead as an unlockable character in LEGO City Undercover

Appearance in The LEGO Movie

Deutsch Français
Community content is available under CC-BY-SA unless otherwise noted.
... more about "Sleepyhead"
RDF feed
Accessories
Teddy bear +
Appearances
8827 Minifigures Series 6 +
ArticleRating
2 +
Image
Col083.jpg +
InfoboxTemplate
Minifigure +
ShopDescription
“Just five more minutes…” Ya-a-a-aw … “Just five more minutes…”</br></br>Ya-a-a-awn! Is it really time to get up already? The Sleepyhead isn’t quite ready to face the morning yet. He was just having a totally awesome dream about adventuring in a magical world full of colorful knights with swords that shoot lightning…or was it the one about the time machine powered by historical hats?</br></br>Who can rise and shine when bed is so comfy and you’ve got your favorite teddy bear by your side? Don’t worry; the Sleepyhead will be up in a minute. Maybe he’ll just close his eyes and grab a quick nap first, though. After all, you can’t get through the day without plenty of rest! Zzzzz…ugh the day without plenty of rest! Zzzzz… +
Theme
Minifigures
Series 6 +
Title
Sleepyhead +
Years
2012 +
Advertisement