"He slimed me.."
―Peter Venkman

Slimer is a transparent light green colour and has eye and mouth printing. It has an entirely new body mould to represent its bloblike shape.

Slimer was a legendary ghost to all on the original staff of the Sedgewick Hotel. His usual territory was the twelfth floor, but his outings were usually non-violent and simply involved gorging himself on food from room service carts. As a result, the hotel was able to keep a lid on the supernatural problems for a while. For some reason, Gozer's approaching time of arrival provoked Slimer (and many other ghosts) into being much more active than usual. Eventually the staff could no longer keep the ghost a secret and called the Ghostbusters. However, the team had not yet fully tested their equipment and were not completely prepared for a full capture. Ray Stantz attempted to hold Slimer by himself, but the ghost escaped through a wall, charged at Peter Venkman, and covered him in ectoplasmic residue.

Slimer fled into the hotel's Alhambra Ballroom, where the Ghostbusters successfully caught and trapped him after causing extensive property damage. Stantz loaded him into the team's storage facility as a demonstration for Winston Zeddemore after the latter was hired to work for them. He and all the other captured ghosts were released when Walter Peck ordered the facility to be shut down. Slimer took refuge in a hot dog cart soon afterward, surprising the vendor greatly upon opening it.

Years later Louis Tully caught Slimer eating his lunch, to which the two of them fled in fear from one another. Louis attempts to catch Slimer using a Proton Pack. On New Year's Eve, Louis decides to take up a Proton Pack and help the Ghostbusters. In an attempt to patch up their initial misunderstanding, Slimer helped an exhausted Louis by giving him a ride to the Manhattan Museum of Art (to which Louis wonders how he got a license to drive a bus). 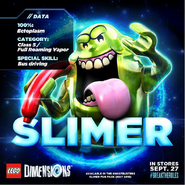 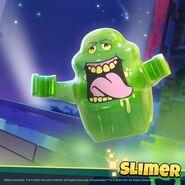