Slithraa is a Ninjago character and minifigure. In the theme, he is a warrior and former general of the villainous Hypnobrai snake tribe.

Slithraa was the original general of the Hypnobrai tribe. When Lloyd Garmadon stumbled upon their tomb and released them, Slithraa tried to hypnotize Lloyd into obedience but failed. Unfortunately, he hypnotized himself because Lloyd fell down and the beams reflected off an ice stalagmite. After that, Lloyd took control of him. When Lloyd first started using them as a personal army, Slithraa never questioned his orders. When they attacked Jamonicia village, Cole knocked the Snake Staff out of his hand. Lloyd called the retreat, and Slithraa ordered his troops to fall back. At the end of the episode, he is seen arguing with his second in command, Skales. After the battle with the ninja, they began to work on building a treehouse for Lloyd. He tells Skales and Rattla to stop slacking and get to work. Later, the treehouse is destroyed and the stolen staff is recovered. Skales claims right to the staff, and he challenges him to fight for it in the "Slither Pit". The two face off, and Mezmo (the judge) tells them to retrieve two weapons. Then Mezmo orders to turn the floor on an angle, and Skales uses the distraction to entrance the general when he tries to entrance Skales. Skales uses fang-kwon-do and defeats Slithraa, then takes the staff. Skales grew a tail, and Slithraa grew legs and lost his tail. He then "becomes loyal" to Skales. He was also present on the Serpentine bus, and later was apparently being monitored by the Destiny's Bounty. 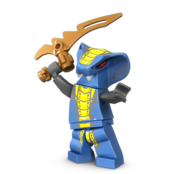 Slithraa (left) after losing the fight with Skales

Deutsch Français
Community content is available under CC-BY-SA unless otherwise noted.
... more about "Slithraa"
RDF feed
Accessories
Axe, The Hypnobrai Staff. +
Appearances
9446 Destiny's Bounty
9573 Slithraa +
ArticleRating
3 +
Image
SlithraaMini.jpg +
InfoboxTemplate
Minifigure +
ShopDescription
Rank: Warrior/General The original … Rank: Warrior/General</br></br>The original keeper of the magic Hypnobrai staff and head of the Hypnobrai tribe.</br></br>After his attempt to hypnotize Lloyd in the ice cave backfires and leaves Slithraa in Lloyd’s control, his authority is drawn into serious question.</br></br>However, Slithraa seems content to lead the Hypnobrai into Lloyd’s battles for sugar and ultimate bad boyhood. After all, Lloyd released them from the ice cave, and no one would ever dare challenge him as long as he still holds the Staff.e him as long as he still holds the Staff. +
Theme
Ninjago +
Title
Slithraa +
Advertisement