You may be looking for Slizer, a minifigure from Space Police.

Slizer, known as Throwbots in the US and Canada, is a subtheme of TECHNIC that launched winter 1999. It made with the intentions of being replaced by Roboriders in 2000. However, it had a storyline that the fans enjoyed.

In 2000 it was replaced by Roboriders, of which ended in 2001 so it could be replaced by Bionicle. Of which Bionicle was similar to the Slizers.

The line debuted a new ball-and-cup system of building that allowed the figures to be articulated in ways not possible with LEGO elements that were extant prior. At launch there were eight elementally themed figures, packaged in special carrying cases that could be worn on a belt.

Each Slizer comes with two discs that can be thrown using a special flinger arm. Most of the figures also feature adjustable heads via a gear mechanism.

Christian Faber, who would go on to develop story and art for BIONICLE, also had a hand in the formation of Slizer. His 1995 Cybots concept proposed the ball-and-socket building system that the theme adopted. [1] He also created much of the art, for both the packaging and the faceplates of the models themselves. [2]

At one point, selling the models via vending machines was considered. [3]

In keeping with the separate theme names between the US/Canada and the rest of the world, the theme has two similar, but distinct, presentations of the story.

The 1999 general LEGO catalog and the May 1999 issue of LEGO Technic Magazine provide the same account of the Slizer story. Planet Slizer is located 4000 light years from Earth, and is divided into seven elemental zones. A transmission from the planet reads "WE ARE SLIZER. JOIN US." The bots are evenly divided into two opposing teams - Fire Slizer, Sub Slizer, City Slizer and Ice Slizer are good, and can combine to form the Super Slizer. Judge Slizer, Jungle Slizer, Rock Slizer and Energy Slizer are evil, and can combine to form the Mega Slizer.

Each Slizer carries out a mission in his home environment. These missions all involve a search for a source of power that will give them an edge in combat.

Comics packed with the sets offer small looks into the story. In one, the Slizer participate in a tournament at the Slizer Dome, throwing discs at the energy ring in the center of the arena. Jungle Slizer is the first to land a shot through the ring's mouth, and shouts victoriously. In another comic, the good Slizers form the Super Slizer and confront their evil enemies, who in turn form the Mega Slizer.

The March/April issue of LEGO World Club Magazine in Germany offers a backstory for the 2000 wave of sets:

There is peace on the Planet Slizer... until the day a meteor thunders through the atmosphere and strikes the surface... half the planet is crushed into microscopic parts!

Many Slizer die in the explosion. From their fragments mutate four new Slizer. They are big, strong, fast and deathly dangerous! And all four are trying to control Planet Slizer. That's why they shoot at everything that moves - including the other Slizer!

There are four mutant Slizer:

In the US, the line is introduced in the January/February issue of MANIA Magazine. The sets are described as robots constructed by aliens in another galaxy. "Light-years" of self-maintenance have led the Throwbots to adapt individually to their respective home planets.

All of the Throwbots are described as "Guardians of the Galaxy" (no, not those ones). Each lives on their own homeworld and endures its natural hazards. While the descriptions of most of these worlds match what can be seen on the box art and in the Slizer bios, Turbo's world is described as one of rolling hills instead of a techno-city, while Jet's is characterized as a "giant gas world" instead of the Slizer Dome.

In a comic featured on Lunchables boxes, Torch encounters a fire monster too great to be dealt with alone. The LEGO Maniac summons Scuba, Turbo, and Ski, allowing them to form Robotops and fight off the beast. This comic reverts to calling the Throwbots' home environments zones, not worlds, in keeping with the Slizer storyline.

This change remains with the launch of the next wave of sets in 2000. The set boxes prominently display the singular, meteor-crushed planet. The January-February 2000 issue of MANIA Magazine provides a short synopsis of the story:

These new Throwbots include Millenia, who can transform between a large flying form and a small bike-riding form, and Spark, Flare, and Blaster, who combine to form the super Throwbot Dynamo.

Throwbots make their final appearance in MANIA Magazine in the May/June 2000 issue. In a "Battle of the Big Bots," Millenia and Blaster showdown in an arena to determine who is "the most powerful Throwbot in the universe!".

The throwing discs used by the Slizer were marketed as collectibles. Six discs existed for each of the 1999 Slizer, labelled from power level 2 to 7. Each power level featured a different part of the Slizer's environment on the disc.

Every set contained its own level 2 disc, and the level 3 disc of another Slizer. The rest could be collected from randomly packed 8508 Supplementary Discs sets. 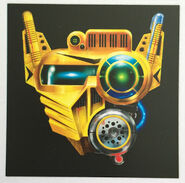 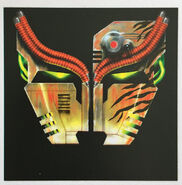 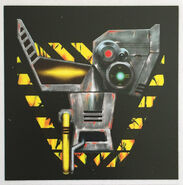 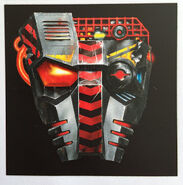 Comic showing off a play scenario

The back of a 2000 Slizer box. Both Blaster and Flare have Onyx's faceplate, as a placeholder

A Throwbots ad featured in a US catalog with Ski Throwbot.
Add a photo to this gallery