You may be looking for Slizer/Throwbot, a TECHNIC theme.

Slizer is a minifigure from the Space Police III theme.

Slizer is a space criminal who appears to be reptilian in nature. Chief mechanic of the Black Hole Gang, his belt buckle displays the Gang's skull emblem. He preferred to work with other members of the gang whenever he required a partner.

He first appeared in Space Police Log 04: H.Q. Briefing. He set a trap on the street of the the city. The trap looked like a car accident. When the main Space Police officer went to briefing, he noticed a space taxi with a dead body nearby. He came there to see what happened, but he found out it wasn't a car accident, and the body was just a dummy. He turned and saw Slizer on his Speeder. Slizer escaped on the speeder and went right to the briefing. Nobody found out he wasn't a Space Police officer, because he worn the officer's helmet. On briefing, he found out about Space Police's secret weapon (it was actually set 5979 Max Security Transport). Then the officer from the beginning entered the room and revealed Slizer's true identity. Space Police officers started chasing Slizer, but he escaped.

A prototype of Slizer's helmet 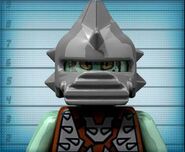