Brickipedia
Register
Don't have an account?
Sign In
Advertisement
in: Class 3 articles, Minifigures introduced in 2014, The Hobbit minifigures,
and 2 more
English

"You will take nothing from me, Dwarf. I layed low on your warriors of old. I instilled terror in the hearts of men. I am King under the Mountain."
―Smaug in The Hobbit: Desolation of Smaug

Smaug the Dragon is the main antagonist of 1937 classic novel The Hobbit by J. R. R. Tolkien and one of the three main antagonists of it's Peter Jackson films 2012-2014. He appears in the The Hobbit: The Battle of the Five Armies set 79018 The Lonely Mountain in 2014.

Smaug was a dragon in the Third Age. One of the last of his kind, Smaug demolished Dale, and captured Erebor, the Lonely Mountain, from the Dwarves. For about two hundred years, Smaug hoarded Erebor's treasures before a company of dwarves led by Prince Thorin Oakenshield made their way back to the mountain along with Hobbit Bilbo Baggins. Bilbo entered to find and retrieve the arkenstone and bring to Thorin. The wizard Gandalf the Grey had departed from the company and left for Dol Guldur. Bilbo snuck into the treasure hoard but Smaug awakened and eventually found him.

After a discussion, Smaug revealed that he was aware of Bilbo's intentions and attempted to kill him, but Bilbo used the One Ring to hide again and managed to escape. Smaug found Thorin and the dwarves and they battled fiercely until Smaug realized that the dwarves were being aided by the Lake-men of Lake-Town. Smaug was distracted by Thorin, who unveiled a large golden statue that they had forged during the battle. They used the gold to distract Smaug due to his greed of gold long enough for the statue to melt into golden pools that they used to try and drown Smaug in it.

This strategy failed as Smaug burst out of the streams of gold, shook off all the gold and flew into the sky, heading for Lake-Town, intending to destroy it. As Bilbo remains horrified at the result in their quest, Smaug quoted "I am fire! I am...death!"

Smaug then made his way to Lake-Town and attacked the city and killed many of the soldiers fighting there. However, Smaug had a weak spot, which was a missing scale from his breast. A soldier named Bard shot a black arrow at Smaug's weak spot, killing the mighty dragon. Smaug's falling corpse landed on a boat which was carrying the Master of the town. This act signaled both the ends of Smaug and Esgaroth. 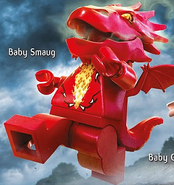 Smaug in his baby form 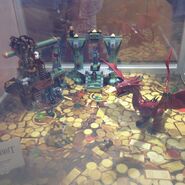 Smaug in his physical form with 79018 King Under the Mountain that was displayed at San Diego Comic Con.

Smaug with Bilbo Baggins as he looks for the Arkenstone.

Teaser image of Smaug from the set. The code unlocks Narzug in LEGO The Hobbit.

The life size LEGO sculpture of Smaug is designed by Erik Varszeg that appeared at multiple conventions. 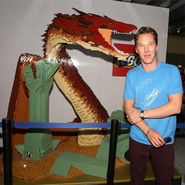 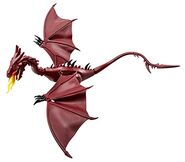