The Snake is a LEGO animal, that would appear to be based mostly upon a real rattlesnake due to its rattle.

Unlike most other LEGO animals the snake does not fit on any sort of stud, however it can be placed in a Minifigure's hand. The snake appears in a wide range of LEGO sets. 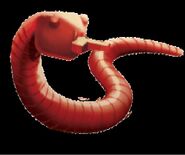 The red snake as it appears in Lego Indiana Jones: The Original Adventures.