Snake is an alien criminal from the 2009 Space Police III line. He wears a helmet with a black visor to hide his identity, and appears to have an eye-like object in the middle of his stomach and a central eye with six extra eyes on his face, three on each side. He wears a skull belt buckle, which depicts the logo of the Black Hole Gang. This proves that he is a member of the gang.

Snake is a space criminal, and a member of the Black Hole Gang. He is described as "yellow, average height" with "extremely bad breath". He was interrogated about a missing statue in the Space Police video Interrogation, but escaped, tribute to Squidman. Later, in It's a Trap...he and a few other space criminals were surrounded by the Space Police. The others were apprehended, but Snake managed to escape, leaving behind some graffiti that read: "you haven't seen the last of us!". It is unknown whether he was recaptured.

A Prototype of Snake's Helmet 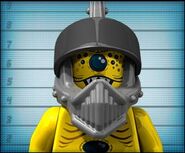 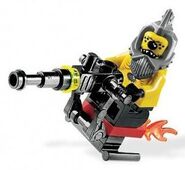 Snake riding his Space Speeder
Add a photo to this gallery