Snappa is a Serpentine from the Fangpyre snake tribe where he serves as a scout and a sniper. He is red and white coloured, with a scaly snake-like body, he wears a fang-necklace and has a viper-like head piece with a human head, except the flesh on his face his red and with squinty-like eyes and has red and black coloured scales, on his chest but with black fangs inbewtwen the outer layers of his legs. His name is a pun on "Snapper". He is a scout for the Fangpyre snake tribe. According to his character card, his dominant element is fire.

This Fangpyre scout is white and red coloured. He also carries a snake fang necklace. He has a new headpeice and a part that goes on top of his head to look like a part of a snake head.

Snappa is a scout for the Fangpyre Serpentine Tribe. He, along with Fang-Suei bit vehicles in Ed and Edna's Junkyard. The next day, he was in the ninja ambush/battle at the junkyard. He was at first seen with Fang-Suei when the snakes revealed themselves, and when the ninjas used spinjitzu. 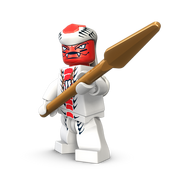 Snappa with the Fangpyre Staff.

Snappa with a Blade.