Snow White is a Disney Princess figure released in 2012.

Snow White has unprinted white legs. Her torso is blue, and printed with a pattern of silver stars. She has light blue sleeves, and long, light nougat arms. Her head is light nougat as well, and she has large brown eyes, and a small mouth with pink lipstick. She has faint pink blushes on her cheeks. Her hair is black, and held back with a simple bowed hairband. She wears a shimmering yellow skirt.

The Wicked Queen of the land fancied herself to be the most beautiful of all people. But her magical mirror told her that a slave, Snow White, was far more beautiful than her. The witch sent a huntsman to kill Snow White, but he couldn't do it, told her to run into the woods. There, Snow White met seven dwarfs and lived in their cottage. They taught her how to fight, and she taught them how to cook and clean.
When the huntsman went back to the Queen, he gave her a deer's heart instead of Snow White's, but she was not fooled. The Queen turned herself into a old woman, and found Snow White and gave her a poisoned apple. Snow White fell asleep, and was entombed in a glass coffin. A prince came into the forest, and kissed her awake, and they got married. 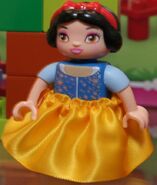 Snow White by her cottage 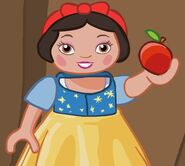