Brickipedia
Register
Don't have an account?
Sign In
Advertisement
in: Class 2 articles, Minifigures (theme), Minifigures introduced in 2011,
and 2 more
English

"Cold enough for ya?"
―Snowboarder

The Snowboarder is a minifigure that was released in 2011 as part of the 8803 Minifigures Series 3. She has a helmet with goggles and a snowboard.

The Snowboarder has mostly white legs, with black printing of zippers and straps. Her torso is also mostly white, and has grey hands. The torso features mainly pink printing of zippers, scarves, and suchlike. Her helmet is pink, and she has white goggles , the same ones used on the football player. Her face shows an excited, grinning expression, and she has long eyelashes and eyebrows. Her snowboard is black with splashes of blue and pink 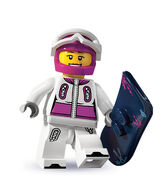 The Snowboarder in a promotion

Deutsch Français
Community content is available under CC-BY-SA unless otherwise noted.
... more about "Snowboarder (Minifigures)"
RDF feed
Accessories
Snowboard, Headgear +
Appearances
8803 Minifigures Series 3 +
ArticleRating
2 +
Image
Snowb.jpg +
InfoboxTemplate
Minifigure +
ShopDescription
"Cold enough for ya?" When it’s fre … "Cold enough for ya?"</br></br>When it’s freezing cold outside and everyone else’s teeth are chattering, the Snowboarder feels right at home. With nerves of steel, she’ll brave the steepest slopes and the wildest jumps, confident that as long as there’s snow on the ground, she can do anything. But as soon as the weather turns warmer and the snow starts to melt, she’s out of there and heading wherever it’s chillier!</br></br>The Snowboarder doesn’t like to be anywhere that’s even a little bit hot. She eats ice cream in the winter and volunteers at the aquarium’s penguin pool in the summer. And what she likes to do most of all is head up a snow-covered mountain with her beloved board and have an icy good time in the cold!ard and have an icy good time in the cold! +
Theme
Minifigures
Series 3 +
Title
Snowboarder +
Years
2011 +
Advertisement