"Is that the new 80-3RX? I’ve been waiting to try this baby out!"
―Snowboarder Guy

The Snowboarder Guy is a Minifigure released in 2011 as part of 8805 Minifigures Series 5.

The Snowboarder Guy comes with a white snowboard featuring blue circular printing. He wears a blue shirt, a navy-blue beanie, grey gloves and grey pants. He also has goggles printed on his face unlike Series 3's Snowboarder, whose goggles were a separate part of her helmet. 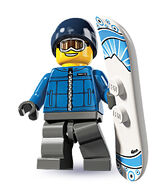 Snowboarder page with the Ice Fisherman in LEGO Minifigures: Character Encyclopedia
Add a photo to this gallery

Retrieved from "https://brickipedia.fandom.com/wiki/Snowboarder_Guy?oldid=2010076"
Community content is available under CC-BY-SA unless otherwise noted.
... more about "Snowboarder Guy"
RDF feed
Accessories
Beanie
Snowboard +
Appearances
8805 Minifigures Series 5 +
ArticleRating
4 +
Image
col080.jpg +
InfoboxTemplate
Minifigure +
ShopDescription
The Snowboarder Guy knows everything there … The Snowboarder Guy knows everything there is to know about wind speed, slope angle and exactly how much wax to put on your board for the smoothest ride, and he puts his knowledge to good use by being the very best snowboard tester in the world.</br></br>If you’ve come up with a brand-new board design, the Snowboarder Guy is just the guy to check it out. He’ll put it through its paces with an amazing series of snowboarding moves, and finish up by telling you just how it compares to all the other models out there. Better hope you’ve made a good one, though, because he never holds back with his opinion!ause he never holds back with his opinion! +
Theme
Minifigures
Series 5 +
Title
Snowboarder Guy +
Years
2011 +