Brickipedia
Register
Don't have an account?
Sign In
Advertisement
in: Class 3 articles, Minifigures (theme), Minifigures introduced in 2011,
and 3 more
English

The Soccer Player is a minifigure that was released in 2011 as a part of 8804 Minifigures Series 4. He sports light orange swooping hair and wears a white-and-blue striped soccer strip, and comes with a silver trophy on a black trophy stand. His jersey and shorts feature the logo of his team (the Brick Kickers) and an orange brick, while the jersey also displays the Octan logo as sponsor. 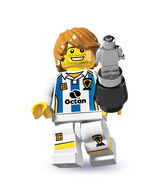 Deutsch Français
Community content is available under CC-BY-SA unless otherwise noted.
... more about "Soccer Player (Minifigures)"
RDF feed
Accessories
Silver Trophy, Black Fez +
Appearances
8804 Minifigures Series 4 +
ArticleRating
3 +
Image
col059.jpg +
InfoboxTemplate
Minifigure +
ShopDescription
"Follow my lead!"
The Soccer P … "Follow my lead!"<br />The Soccer Player has led the Brick Kickers team to many victories, and the other players all respect his strategy and skill on the field. He's a fast runner, an accurate kicker, and he's knocked so many soccer balls into the goal with his head that the fans joke that it's made of steel.He may not win every game, but the Soccer Player always does his best and plays with a smile. It's earned him a reputation as both a good sportsman and a good sport who's almost as happy with a hard-earned second place as he is with a first-place trophy! place as he is with a first-place trophy! +
Theme
Minifigures
Series 4 +
Title
Soccer Player +
Years
2011 +
Advertisement