Solo: A Star Wars Story is a Star Wars subtheme based on the movie of the same name. Sets were first released in Spring 2018, and there are currently 7 sets, 1 battle pack, 2 buildable figures, and 4 polybags.

Six years after the formation of the Galactic Empire, on the shipbuilding world of Corellia, a "scrumrat" and aspiring pilot named Han and his lover Qi'ra long to escape the clutches of the local criminal gangs. They successfully bribe an Imperial officer who grants them passage on an outgoing transport, but Qi'ra is apprehended by their pursuers before she can board. Han vows to return for her, and with no means of income, joins the Imperial Navy as a flight cadet, with the Imperial recruiting officer dubbing him "Han Solo" in absence of a surname.

Three years later, Han has been expelled from the Imperial Flight Academy on Carida for insubordination, and is serving as an infantryman during a battle on the planet Mimban. He encounters a gang of criminals posing as Imperial soldiers led by Tobias Beckett. He blackmails them into allowing him to join, but Beckett has him arrested and condemned to battle a "beast" held in captivity. The beast is revealed to be a Wookiee named Chewbacca. Owing to Han's ability to speak Shyriiwook, the two stage a fight for the benefit of their captors and escape after collapsing their cell.

Beckett reveals he was ordered to steal the shipment of coaxium hyperspace fuel for Dryden Vos, leader of the Crimson Dawn criminal syndicate, and he now fears Vos' wrath. Han and Chewbacca volunteer to help him steal another shipment. They travel to Vos' yacht, the First Light, where Han is confused to discover Qi'ra, who confesses that she is a member of Crimson Dawn. Han announces a plan to steal unprocessed coaxium from the mines on Kessel. Vos insists on Qi'ra accompanying them.

To procure a ship for the heist, Qi'ra introduces the team to Lando Calrissian, an accomplished smuggler and pilot. Han challenges Lando to a game of sabacc, with the wager being Lando's ship, reputed to be the fastest in the galaxy. Lando uses sleight of hand to win but is convinced to join the mission in exchange for a share of the profits. The team boards his ship – the Millennium Falcon – and head for Kessel. After reaching the planet and infiltrating the mine, Lando's droid co-pilot L3-37 instigates a riot. They use the confusion to steal a consignment of unprocessed, volatile coaxium, but L3 is severely damaged and Lando injured during the escape.

Han pilots the ship, knowing that they must make the infamous "Kessel Run" in less than twenty parsecs if they are to reach Vos before the coaxium explodes. Han's prodigious piloting skills allow them to evade an Imperial blockade, only to awaken a massive summa-verminoth. The crew tries to escape the monster, but end up arriving at a large gravity well. Thinking fast, Han ejects the Falcon's escape pod into the well for the summa-verminoth to follow, which is instantly sucked in. Shortly after, the crew manages to escape using the coaxium, and they rendezvous with Vos on the planet Savareen.

Vos surprises the team by announcing that the coaxium is fake – he reveals that his "inside man," revealed to be Beckett, informed him of Han's plan to sell the real shipment to the Cloud Riders, a rebellion group led by Enfys Nest. Han announces that he anticipated Beckett's deception – the coaxium they are holding is real. Beckett takes Chewbacca hostage and escapes with the coaxium. A gunfight between Han, Qi'ra and Vos results in Qi'ra killing Vos. She urges Han to help the Cloud Riders and insists she'll join him shortly. After Han leaves, Qi'ra seals the room.

Han catches up with Beckett and Chewbacca and kills Beckett after a stand-off. Han and Chewbacca deliver the refined coaxium to Nest, who reveals her plans to use the coaxium to aid the rebellion against the Empire. She offers Han the chance to join her but he declines, and Nest states that some day he may feel more sympathetic to the rebels' cause.

Alone aboard Vos' yacht, Qi'ra contacts Vos' superior who is revealed to be Darth Maul. She informs him of the mission's failure and assumes Vos’ position, but carefully avoids telling him about Han's involvement. Rather than join Han, Qi'ra leaves on the yacht - though having given Solo a clean break from his debts to Crimson Dawn.

Elsewhere, Han and Chewbacca soon track down Lando, and Han again challenges him to a sabacc game for possession of the Falcon. Han subtly relieves Lando of the cards stashed up his sleeve and wins the game. Han plans to go to Tatooine, where Beckett told him that a gangster is putting together an organization, as the Falcon jumps into hyperspace.

Poster with the sets 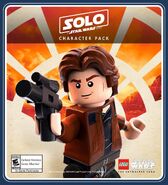