Solomon Blaze is a Galaxy Squad minifigure released in 2012 who later reappeared in the Ultra Agents theme in 2014.

Solomon Blaze's face is printed with a concentrating face, and a small scope over his right eye. His alternate expression, like all human members of the Galaxy Squad, has a breathing apparatus printed. His helmet is the same colour blue as the ADU soldiers from Alien Conquest, as are his arms and legs. His torso is light grey with a white stripe running vertically through the center. His armour printing is based on the muscles underneath. He has a small symbol, that of his squad, printed in the upper-left corner of his chest. A black utility belt is also present at the base of the torso. Grey armour printing is continued in the center of the hips. Solomon's legs are printed with grey knee-pads lined with black.

A new variant of Solomon Blaze has been released in the Ultra Agents series in 2014. He is older than he was in Galaxy Squad. He has short grey hair, the same style used in Jay, Green Lantern and several others. His legs are black with an artificial right leg and no printing on his left one. He has light grey hands and black arms with no printing on them. He wears a black suit with a golden button in the neck and a tie of the same color. His suit has the logo of the Ultra Agents colored in silver, on his left side, which features the letter "A" with a star surrounding it and a lightning in the middle. His face is yellow and has a scar in the upper, right side of his face, a dotted beard with and a small grey moustache and eyebrows. He has two expressions, one depicting a determined look while the other depicts a smirk. He is also the leader of the team. His main vehicle appears to be the convertible included in 70162 Infearno Interception.

Solomon Blaze was a member of the Galaxy Squad and the leader of the Blue Squadron. He fought against the Alien Mosquitoids, and the Alien Buggoids. When he became older, he joined the Ultra Agents and was cherry-picked to head the team. He became their leader and gave them training.

After joining the Ultra Agents, he attempted to capture Infearno, but was foiled as Infearno escaped.

Time later, Solomon discovered disturbance in Downtown and called the Ultra Agents back to the HQ to find the problem, just to realize that Terabyte was the one who hacked all the communications in the place. After everything was restored, he congratulated his fellow Agents at the HQ.

During Spyclops' second attack at the HQ, a third attack was occurring at Professor Brainstein's lab, The Peak. Later, when Toxikita was captured by Agent Curtis Bolt and an unknown agent, Solomon Blaze arrived at the scene. As Brainstein sacrificed himself by destroying The Peak, Solomon quickly called for the Agents and Brainstein, just before saying that everything was destroyed. But after the agents survived, Solomon quickly went to help them climb to the ground. He immediately received a call from Agent Caila Phoenix, calling for help, just before all the super villains escaped to open air.

After the breakout, Solomon lead the way in the air, while Curtis Bolt and an unknown agent travelled across the ground. He was flying towards AntiMatter's portal, but was shot down by Invizable riding his scooter. He was immediately saved by Max Burns, who fell from the sky hooked to the UltraCopter. Later in the battle, he jumped to the AntiMatter's flyer in an attempt to save all the captured citizens. He saved them, but at the cost of himself, when both Solomon Blaze and AntiMatter entered the portal and disappeared in the sky.

A CGI of Solomon Blaze 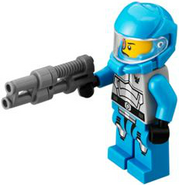 Solomon with a blaster