Sonic The Hedgehog is a video game character whose first full appearance was in the 1991 SEGA Mega Drive/Genesis game, Sonic The Hedgehog. This character has appeared in every Sonic game from then on, with his first LEGO debut being in LEGO Dimensions Year Two as the sole representative of his eponymous franchise.

Sonic the Hedgehog, also known as the "Fastest Thing Alive", was supposedly born on Christmas Island sometime before a takeover of the nearby South Island by Dr. Ivo "Eggman" Robotnik. Sonic traveled there and freed the enslaved animals from the robotic shells Robotnik trapped them in. Later, Sonic would travel to West Side Island in search of a new adventure but ended up discovering Robotnik survived defeat in Scrap Brain Zone, and that he had begun creating a new wave of Badniks. Sonic was not alone in defeating his nemesis once more, as young inventor Miles "Tails" Prower was eager to assist his hero in combat.

Since these first two adventures, Sonic has appeared in numerous games spanning countless platforms from the SEGA Genesis to the Nintendo Switch. His trademark speed has been of assistance to him in nearly every game with only a few exceptions. 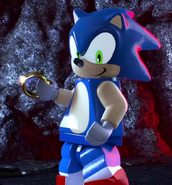 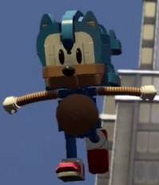 Start a Discussion Discussions about Sonic the Hedgehog