This article is about the hat. For the set, see 4701 Sorting Hat.

The Sorting Hat is a Wizard Hat accessory of the Harry Potter theme which has marking on it.

The Sorting Hat sorts the new children that go to Hogwarts into one of the four houses. The four houses are: Gryffindor, Hufflepuff, Ravenclaw and Slytherin. The Sorting Hat originally belonged to Godric Gryffindor, one of the founders of Hogwarts. Sometimes it also sings songs about the four houses at the start of the year before the sorting ceremony, though this is omitted in the film. To sort people into the four houses, the hat is placed on the student's head and reads their mind. The brave ones go to Gryffindor, those who are smart go to Ravenclaw, pure-blood people sometimes go to Slytherin and those who are true and loyal go to Hufflepuff.

The Sorting Hat is kept all year in the headmaster's office until needed. He was seen by Harry Potter in Dumbledore's office in his second year at Hogwarts. The sorting hat claims to be the smartest hat in the world and in one of his songs says he will "eat itself" if someone finds a hat smarter that him. During the Battle of Hogwarts Lord Voldemort made the hat burst into flames and what happened after that is unknown.

In the video game, the sorting hat has a variant not released in any sets. The first original LEGO Sorting Hat was brown. The second variant was kind of red, but this sorting has was light brown (unlike the first variant which was dark brown). In the game, the Sorting Hat is wiggly. The scene where Harry goes to Professor Dumbledore's office is omitted though, so the Sorting Hat is only seen at the beginning of the Philosopher's Stone. The Sorting Hat is not playable in any games. 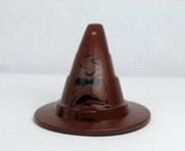 Professor McGonagall holding the Sorting Hat in the video game. 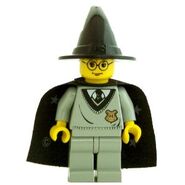 Harry Potter wearing the new version of the Sorting Hat 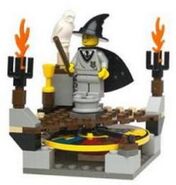 The Sorting Hat in its own set.