Brickipedia
Register
Don't have an account?
Sign In
Advertisement
in: Class 4 articles, Themes, Themes introduced in 2009,
and 4 more
English

Space Police III is a LEGO Space theme that began in 2009 and lasted until 2010. It is the successor to Space Police I and II.

This theme was never, in actuality, named Space Police III - it is merely labeled Space Police, though this is the third reboot of the overall theme. This theme included more minifigure head parts for aliens than the previous themes like the head pieces of Kranxx, Jawson and Squidman and sets generally included at least one alien minifigure and one officer minifigure.

The theme replaced Mars Mission and in 2011, the theme was replaced with Alien Conquest.

The main characters in the theme are the Space Police trying to capture the alien criminals. Many of the sets featured an animation on LEGO.com demonstrating the set. Criminals include the Black Hole Gang (consisting of Kranxx, Snake, the Skull Twins, Slizer, Frenzy and Squidman) So far, there have been 6 police logs showcasing different crimes being committed, to tie in with the sets. Each of the sets feature logos or insignias of previous LEGO Space themes, such as Spyrius, Blacktron, and Classic Space, as a shoutout to the history of LEGO Space. Similar to Space Police II, several Space Police III sets contain modular containment pods for criminals. These pods, aside from minor colour shifts, are all identical from set to set, and can be interchanged between sets. They all feature a "blow away" target which, when hit by a weapon mounted on an Alien Criminal vehicle, would blow open the top hatch of the pod and free the prisoner.

In 2010 there was a contest requesting readers to build a space vehicle to catch Brick Daddy, Craniac, and Jawson. It was featured at the end of the second 2010 Space Police comic. 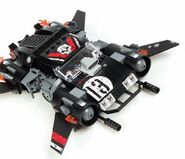