The Space Villain is a Minifigure that was released in 2011, as part of 8803 Minifigures Series 3. He has a robotic arm, a robotic leg similar to Mad-Eye Moody's pegleg, a different colour Spaceman blaster gun and helmet (later used in Alien Conquest in dark azur), and robotic printing on his face similar to Fire-Arm. He was one of five minifigures chosen for a re-release in slightly altered version within the set 850458 VIP Top 5 Boxed Minifigures. 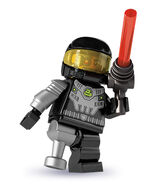 Promotional artwork
Add a photo to this gallery

Retrieved from "https://brickipedia.fandom.com/wiki/Space_Villain?oldid=1848753"
Community content is available under CC-BY-SA unless otherwise noted.