Speed Racer appears in two sets, wearing a different torso in each. In the first, he's wearing his classic blue racing shirt with open collar; in the Grand Prix set, he's instead wearing the more advanced white jumpsuit the character wore in the movie's climax. Both sets include his white racing helmet printed with an "M" pattern.

Speed was born into a family obsessed with motor racing and grew up surrounded by the machines built by his father, Pops Racer, and driven by his older brother Rex. When Rex died in a crash, Speed quickly rose to continue his legacy, coming to the attention of the powerful crime lords and corrupt corporations that controlled professional racing. After being approached by Arnold Royalton of Royalton Industries and rejecting their offer to have him race for them, he discovers just how corrupt racing has become when every other driver but one conspires to crash him out of his next race. The one, Racer X, later approaches Speed and asks for his help in saving the family business of another "good" racer, Taejo Togokahn, from a hostile Royalton. Speed does so, but when the race is won Taejo betrays the others, using the victory simply to force a higher price from Arnold Royalton. Speed angrily confronts Racer X, demanding to know if he really is his brother, Rex - their racing styles are almost identical. Racer X removes his mask, revealing an unfamiliar face and telling Speed that his brother is dead. Taejo's sister Haruko then arrives and gives Speed the Grand Prix race ticket Taejo had won, allowing Speed to race directly against the best of Arnold Royalton, who had been "scheduled" to win. He does so and wins the title, revealing Arnold Royalton's cheating tactics in the process, which eventually leads to the entire racing industry coming clean.

In The LEGO Movie, Speed Racer is a Master Builder and a member of the team that went with MetalBeard to the Infinitieth Floor. He was taken down by a Shark and put in a Think Tank. He is freed when Emmet jumps out of Octan Tower with the battery that was going to be used to kill the Master Builders. In the background, when Bad Cop is reunited with his parents, he can be seen giving the Zookeeper a high-five.

Speed Racer can be seen next to Disco Dude and The Flash in MetalBeard's crew. 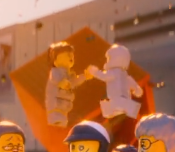