This article is about the game. For the cards, see List of Legends of Chima Cards.

Speedorz are Legends of Chima sets released in 2013, and are apparently used in tournaments or battles that the characters in Chima participate in. In one set, a spinner was included to use in the game. The objective of the game is to win six Chi. Trading cards are also used when playing to give one's character an advantage in battle. The sets vary in size: the smaller sets, of which there are currently seven, generally consist of one modified Speedor, five cards, two weapons, six Chi, and some obstacles or challenges (such as boulders to knock down or "flying" targets to hit), while larger sets, of which there are currently three, generally consist of two modified Speedorz; ten cards, a few weapons, and 12 Chi Crystals; and larger obstacles, challenges, or background features. In 2014, Lego released a new type of Speedorz that you can pull the rip cord through the back instead of the top.

How to play with the Speedorz

Each Speedor consists of a minimum of three items: a frame decorated in the style of the Speedor's rider, a wheel, and a ripcord. A person wishing to play with the Speedor holds the Speedor in one hand and the ripcord in the other. Then they insert the ripcord in a space in between the wheel and the frame and soon afterwards pull it out as hard as they can, causing the wheel to spin. They then let go of the Speedor, which proceeds to travel speedily forwards. Often, the object of the game being played will involve challenges including having the Speedor hit a certain target to have an orb of chi or another object fall down or having it dodge a variety of obstacles.

In the Legends of Chima story line, Speedorz are among the vehicles used by the characters to battle with one another or travel across the large land of Chima. They are also used competing for CHI by jumping through rings, knocking over obstacles, dodging obstacles and other challenges. The Speedorz are shaped like the head of the animal who rides them.

The sets below all contain a minifigure, a slightly-modified Speedor with ripcord, five trading cards, two weapons, six pieces of chi, and some sort of obstacle or challenge.

70113 CHI Battles is one of the two starter sets of 2013, and it contains Longtooth, Wakz, two slightly-modified Speedorz with one rip cord each, ten trading cards, four weapons, and twelve pieces of chi. It also consists of a variety of obstacles and challenges, such as two ramps, a tower from which a blue ball must be knocked down using the Speedorz and the ramps, and some spike "pylons". The second one, 70114 Sky Joust, has two minifigures, Eris and Rawzom, and has the same numbers of Speedorz, rip cords, cards, weapons, and Chi. There is also ramps and a podium with Chi, just like many other Speedorz sets.

70115 Ultimate Tournament is the only known battle arena set to date, and it contains Laval, Cragger, two slightly-modified Speedors with one rip cord each, four weapons, and twelve pieces of chi. It also consists of a variety of obstacles and challenges, such as a ramp, a statue from which a blue ball must be knocked down from using the ramp and the Speedor, some flame "pylons", and a gate decorated to look like a lion. Hitting a target suspended from the gate drops down another blue orb.

Other sets with Speedorz

Only one of these sets, 70011 Eagles' Castle, is known of so far. The set includes Ewald, Worriz, Lennox, two slightly-modified Speedor with one rip cord each, five trading cards, eight weapons, and thirteen crystals of chi. In the set, the two Speedorz launch off of ramps at a grey column, on top of which is a crystal of Chi. Knocking over the column causes the large brick-built eagle's "wings" to open up and reveal the golden super-crystal of chi.

Lagravis on his Defendor II

Leonidas on his Defendor IV

Lennox on his Defendor VI

Laval on his Defendor XII 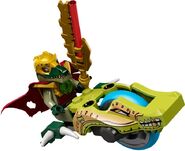 Crominus on his Chompor V12

Cragger on his Chompor V18

Crug on his Chompor V9 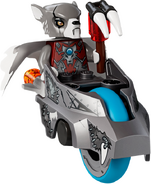 Worriz on his Huntor

Gorzan on his Treehugger III

Furty on his Huntor Foxari

Lagravis' Speedor in the TV Show 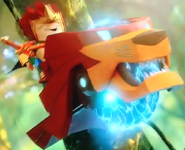 Laval's Speedor in the TV Show 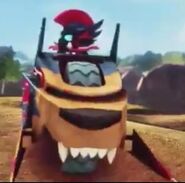 ShadoWind's Speedor in the TV Show

Cragger's Speedor in the TV Show

Rhogon's Speedor in the TV Show

Worriz' Speedor in the TV Show

Eris' Speedor in the TV Show

Gorzan's Speedor in the TV Show

Razar's Speedor in the TV Show 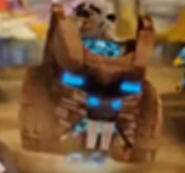