He was once a man named Victor who caught the turtles on video, but mutated into a giant spider after being captured by The Kraang. He is one of Raphael's arch-enemies, alongside Fishface. At first, he was able to beat Raphael by insulting him, thus making Raph's temper flare and causing him to lose focus. However, once Splinter taught the turtle to ignore Spider Bytez' words and overcome his anger. 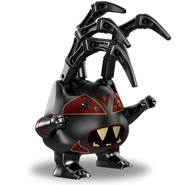 CGI Spider Bytez
Add a photo to this gallery