Spritle Racer is a minifigure from the Speed Racer theme.

Spritle appears in just one set, 8161 Grand Prix Race. Though the character wore a suit and tie during the Grand Prix scene in the movie, the minifigure is seen here wearing his more distinctive yellow top with monkey print.

The youngest child in the Racer family, Spritle is just as devoted to motor sports as his father and big brothers, though he's too young to get behind the wheel himself. He's not old enough to remember his eldest brother Rex, who left when his other brother, Speed, was about the age Spritle is now. He spends all his time with his pet and best friend, Chim-Chim the chimpanzee, who dresses and behaves just like Spritle does. Together, they spend most of their time getting into trouble, usually by sneaking into the trunk of Speed's car or when trying to score some free candy. 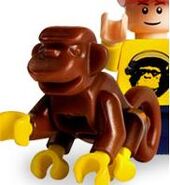 Spritle with Chim-Chim
Add a photo to this gallery

Retrieved from "https://brickipedia.fandom.com/wiki/Spritle?oldid=1570550"
Community content is available under CC-BY-SA unless otherwise noted.