Squidman is a LEGO Alien Minifigure from the 2009 Space Theme Space Police III. He has committed the crimes of burglary, vandalism, and theft, along with breaking out another space criminal, Snake.

This gold crazy mollusk menace calls himself the King of the Squidmen, even though no one else in the galaxy has ever seen another alien like him. Squidman is all about Get-Rich-Quick schemes and making a fast space buck, no matter what he has to steal or who he has to cheat to do it. Good thing his crooked schemes usually backfire right in his face!

Squidman (aka, P Squiddy, The Mollusc Menace) is an alien criminal from the 2009 Space Police III line Squidman has made Squidtron to boss around, but the latter ran off and decided to be an even better criminal. Squidman runs a pitstop, at which he often hides weapons and illegal stuff like gold and chemical vats. He has been spotted to actually work out there and that he pimped up some of the vehicles of the Black Hole Gang's fleet. He hasn't been reported to be caught for it. He currently uses Squidtron as an alibi to commit crimes (or he is used instead), as seen in the police logs. It should be noted that Squidman is the only story-wise known member of his species, as stated by his bio. 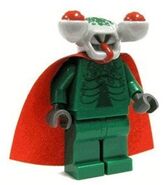 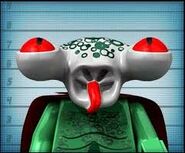