Squidtron is an alien criminal in the 2010 Space Police III. He features a repainted Squidman head with yellow eyes and purple markings on the top of his head. He is a robot criminal made by Squidman.

On his LEGO bio, it states that Squidman had gotten bored of not bossing aliens around, so he built Squidtron, a robot made to look like Squidman's species. He malfunctioned, and he decided to become worse than Squidman. Then he ran off to his own life of crime. 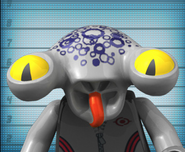 Squidtron with an alternate torso.

Squidtron from the side
Add a photo to this gallery